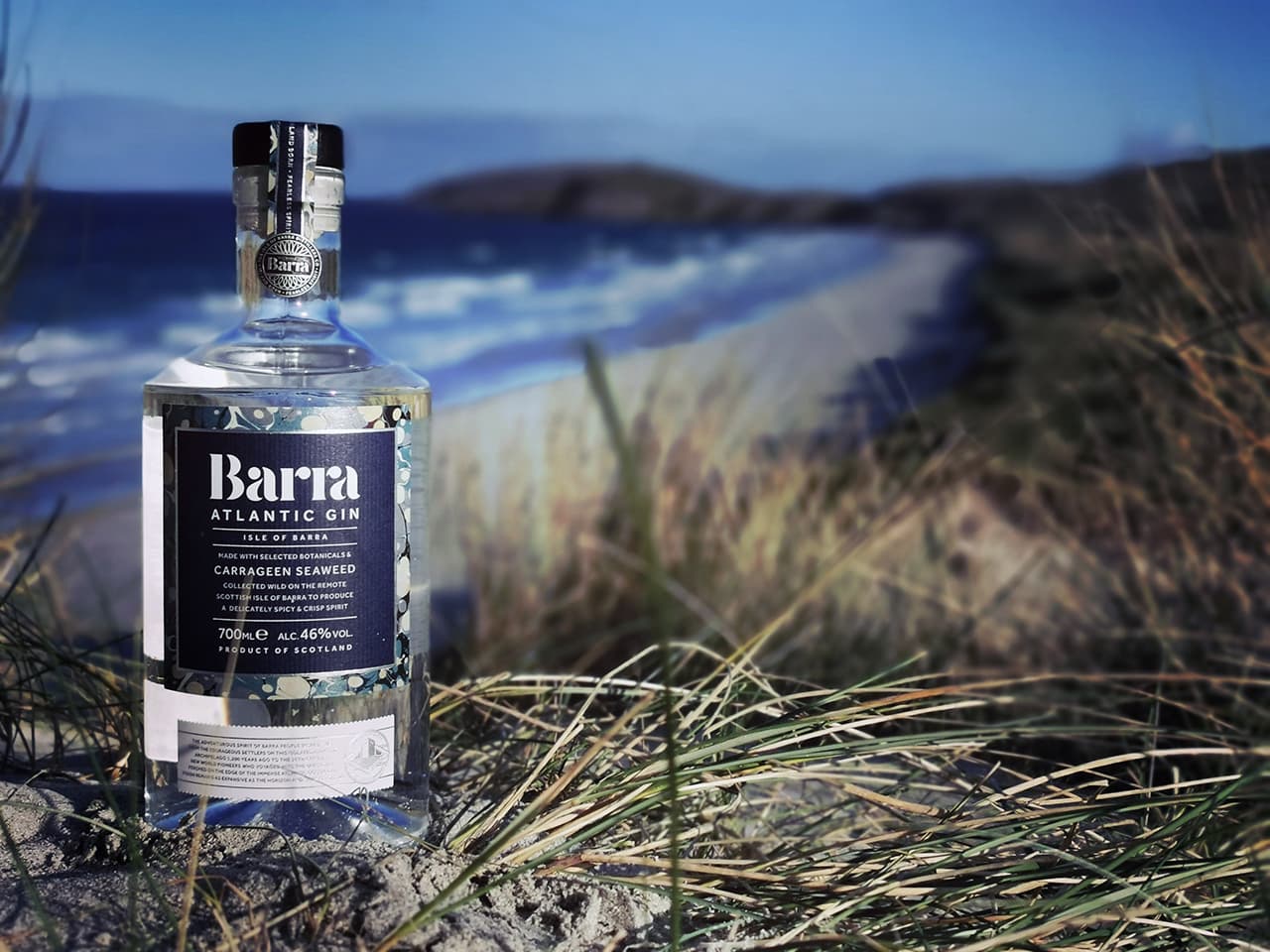 Disclosure: bottle of Barra Gin gifted by the ditiller for review. Opinions entirely that of the author.

Over the last few years we’ve seen an increasing number of gins named after the Scottish isles – from Harris to Orkney, Arran to Bute, there are new Scottish ‘island’ gins appearing with regularity.

My latest review looks at Barra Atlantic Gin. Originally distilled in London, the spirit has now returned ‘home’ to the remote Hebridean isle. I was lucky enough to be sent a bottle of batch 1 of the island’s first ever legally distilled gin.

You can buy Barra Atlantic Gin on their website or view a map of stockists here.

An ode to home

Born and bred on the remote island of Barra, husband and wife team Michael and Katie Morrison launched their gin in August 2017. Using carrageen seaweed foraged on the island, Barra Gin is an ode to the pair’s home on the rugged Atlantic coast.

Given the logistics of setting up a distillery on such a remote location, as with many other Scottish island gins, they originally contract-distilled. Their choice of partner – Thames Distillers in London – caused some controversy.

The Herald wrote an article in December 2017 calling out a number of brands with gins named after Scottish locations, distilled south of the border.

Reading the article back, I can see their point. And I do agree that there needs to be some form of control over what constitutes a “Scottish gin”. Is it right that someone can merely ‘claim’ a location as their own, with little or no authenticity?

For some of the brands mentioned in the article, their story is not quite so clear cut. With Isle of Barra Distillers, there are several reasons as to why the article was perhaps unfair on them.

Firstly, the founders were born and bred on Barra, so there’s a connection there. It was also part of their original business plan to bring production back to the island.

Secondly, as far as I can tell they were transparent about where Barra Gin was made (although I can understand the argument consumers might reasonably expect the name on the bottle is where it’s made).

Lastly contract distilling is a common route to market for many island gins, given the remoteness of the location and all the other hoops you need to jump through. The only difference between Barra and some others is they were contracted in England, as opposed to another distillery in Scotland. Many of the arguments posed in the Herald article are also relevant to those brands, but with the obvious difference.

“Using carrageen seaweed foraged on the island, Barra Gin is an ode to the pair’s home on the rugged Atlantic coast.”
My own opinion? So long as there’s a clear transparency, contract distilling is a good thing. It opens up the consumer to greater choice and the diverse nature of the category we now see. It’s up to the consumer to then decide, given they should have all the information at hand.

Personally, the connection aspect is important to me when purchasing – what’s the rationale for naming a gin after a town, city or indeed, island. And that’s what set Barra Gin apart in the early days.

Fast forward a couple of years and they now distill on the island, 18 months ahead of the original schedule. It’s always nice to see a brand bring production in-house and realise that ambition, particularly when it’s in a small community such as Barra. 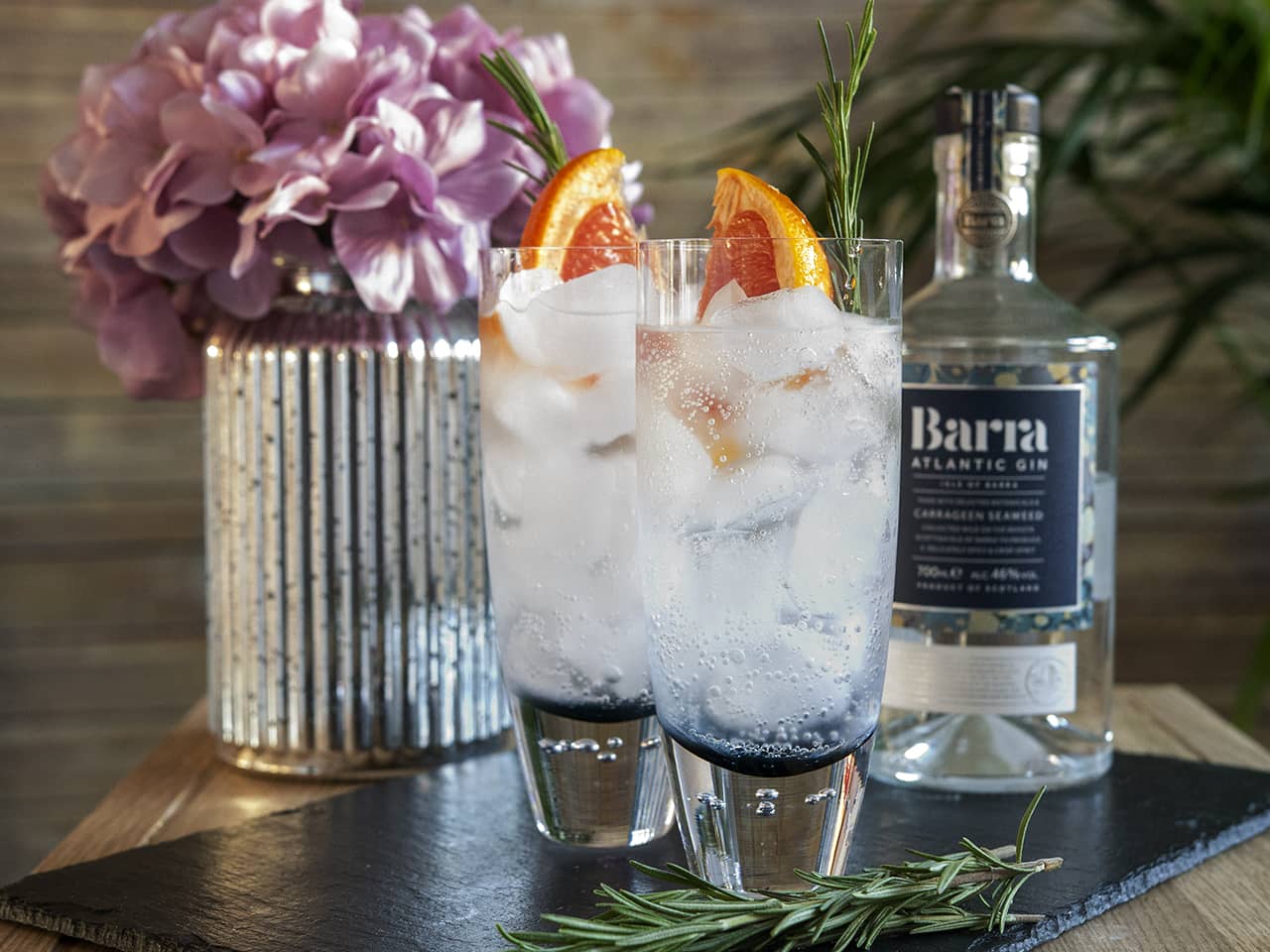 Originally distilled at Thames Distillers in London, production of the Barra-distilled gin is now taken over by co-founder Michael Morrison. A different distiller, still and location will almost certainly have an impact on the continuity of the product and Michael explained they worked closely with Charles Maxwell at Thames to keep the profile as close as possible to the original.

To do so the recipe has had to change slightly, Michael advises. Barra Gin uses 17 botanicals in its recipe. Central to this is their native ingredient, carrageen seaweed. It’s a type of red algae which grows abundantly on the Atlantic coast of Europe and North America.

“Barra Gin uses 17 botanicals in its recipe. Central to this is their native ingredient, carrageen seaweed.”
It’s commonly used in cooking and you’ll often find it in foods such as ice cream. Indeed Michael’s mother used it for making her homemade seaweed pudding.

Each piece of carrageenan is foraged on Barra, washed with fresh water and bleached (or dried) outdoors for five or six weeks before it’s ready to use. While the full recipe is kept secret, Michael did disclose some of the other botanicals used in the gin. These are juniper, cassia bark, liquorice root, lemon peel, orange peel, mint, peppermint and heather.

Vapour distillation is used to distill, which is where the botanicals are placed in a basket above the base spirit. This is then heated and as the liquid turns to vapour, it rises up through the basket of botanicals. The flavours then infuse with the spirit vapour before it condenses back to liquid, ready for dilution to bottling strength.

How to serve Barra Gin 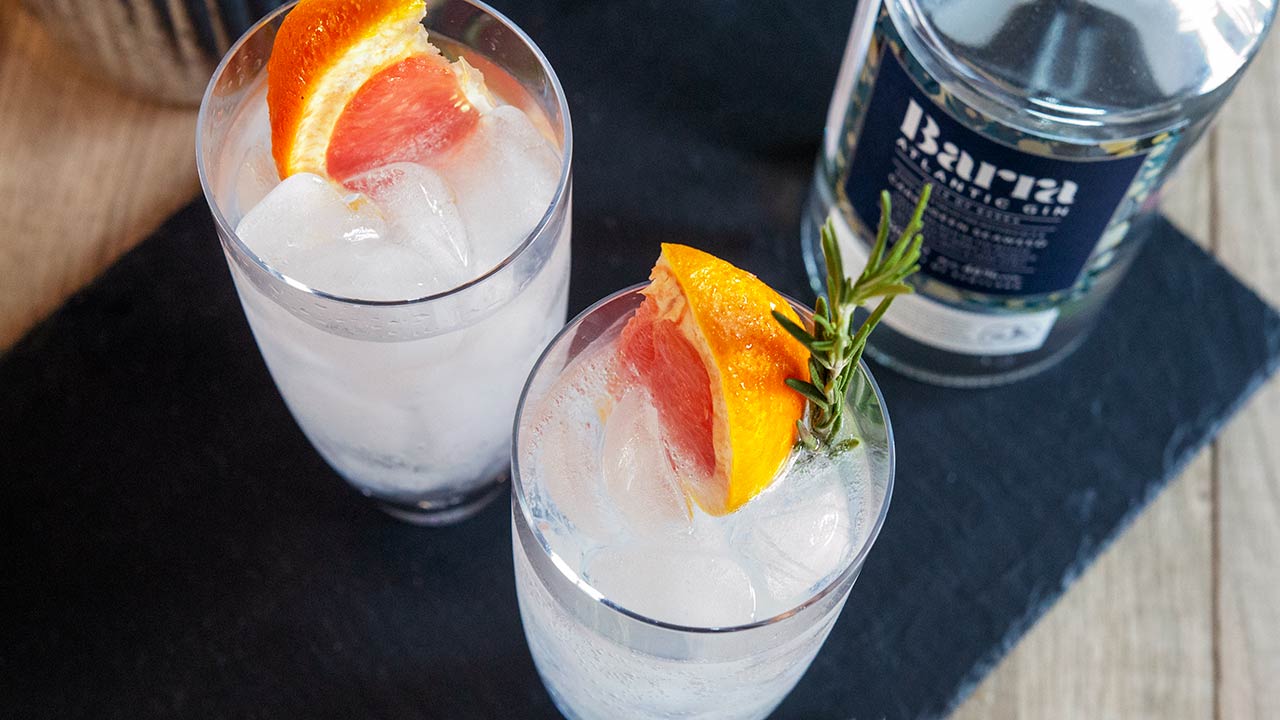 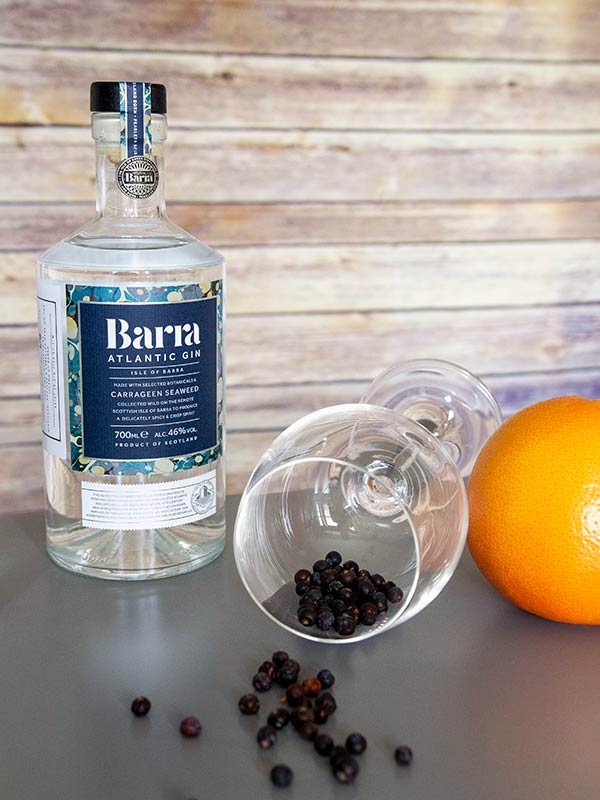 With the first few sips, I’m not blown away. It’s such an unusual flavour profile and miles away from what I was expecting. The more I go back to it however, the more pleasant I find it, as my palate adjusts.

On the nose, it smells amazing! Juniper, florals and citrus are all present with a subtle saltiness coming through. The floral and sweet notes come through on the palate with a hint of warming spice, while the finish has a slight salinity and a long burst of herbaceous menthol from the carageen.

I’ll be honest, with the first few sips, I’m not blown away. It’s such an unusual flavour profile and miles away from what I was expecting. The more I go back to it however, the more pleasant I find it, as my palate adjusts. It’s really fresh, like a coastal Scottish breeze – it’s quite transportational.

With a splash of tonic the journey is similar. It’s more herbaceous on the palate and there’s an increased saltiness to the finish with the menthol-like finish even more elongated – like breathing in the bitter winds on the Atlantic coast.

This menthol finish is more pronounced with tonic and as the gin is diluted further, this gets even stronger. For that reason, I’d keep it to just a dash of tonic, or sip neat. 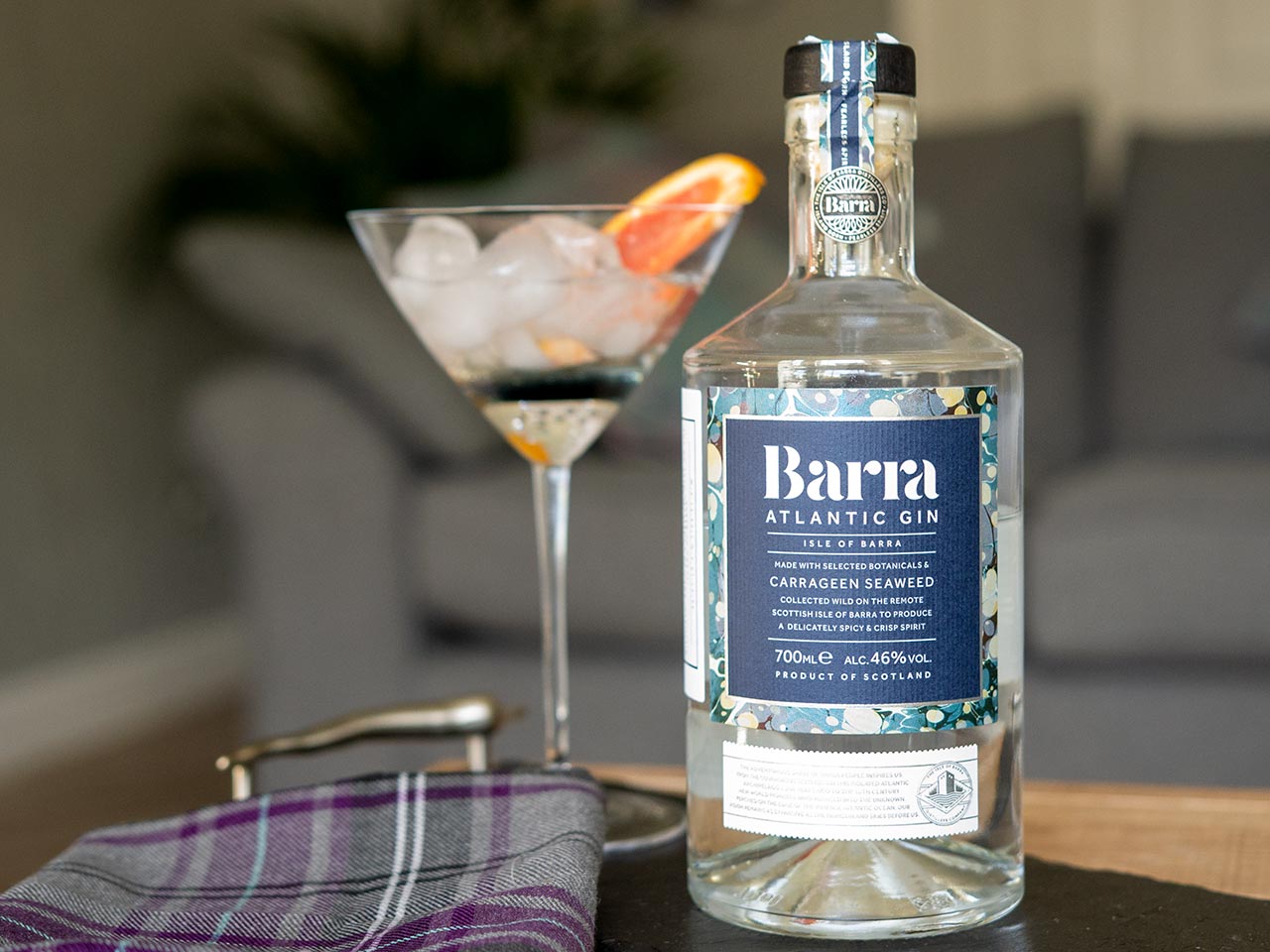 I’m a firm believer that branding is central to making a good gin a great one. The story of the people behind the gin is a huge part of that, but so too is the packaging and marketing.

Over the last few years, there have been some amazing examples of this. Isle of Harris is probably the standard bearer for being the complete package – story, taste, design and branding are all on the money. They work in an amazing way together, with such synergy.

Given the fact that Barra Gin is, like Isle of Harris, from the Outer Hebrides, there will always be comparisons. And I admit, it was always at the back of my mind while reviewing this gin. While they both use seaweed as a botanical, the flavour profile is definitely different. But a few things such as their social media to the displaying of their distillery coordinates on their bottle lean the brand ever so slightly into Harris’ space, subconsciously or otherwise.

Given the criticism of their initial production location, I can understand the desire to proudly declare their new island presence. I just feel it’s important to carve their own identity. This is a minor criticism and there’s enough they already do to differentiate themselves and it’s something they should look to evolve moving forward.

The bottle itself is extremely eye-catching, with the label evoking the carrageen which is central to their brand. I particularly love the metallic seal on the bottleneck – there’s something quite classy there. A nice bottle in its own right and befits its premium price point of £37.

Barra Gin definitely creates an element of transportation and now they’re distilling on the island it gives even more credibility to the brand.

An unusual flavour profile, it might not be for everyone, but they’ve created something which is really their own on that front.

There’s some work to be done with their brand in my opinion, but as a small team, they’ve done tremendously well to get the business to this point, culminating in bringing production of their gin home. It’s a distillery I look forward to watching evolve.