Gifted: bottle of Brentingby Gin gifted by the distillery. Review and opinions entirely that of the author.

To create a quality gin takes time, care and skill. Brentingby Gin is the story of all three, and the result is quite special. Read our review to find out all about this contemporary but “proper gin”, from its brand story, process, tasting notes, and perfect serve.
IN A HURRY? Click the links below to take you to the relevant section in the review: process, botanicals,  how to serve, tasting notes, packaging, verdict

If you want to be the best it helps to learn from the best. Bruce Midgely of Brentingby Gin definitely follows this mantra. “Securing help and guidance from Tom Nichol was a blessing,” he explains to Gin Foundry. “He has forgotten more than I could ever know about distilling.”

Nichol is a legend of distilling and is the master distiller behind the famous Tanqueray 10. And Midgley hails the Scot’s encyclopedic knowledge of the craft. “You can’t learn what he knows from a book,” Midgely told me. “He really is a brilliant mind.”

However, it took a bit of perseverance to secure Nichol’s services. To his credit, Midgely was determined; he was on a mission and contacted several master distillers. Some didn’t respond and others had no interest. Initially Nichol explained he was too busy but after seeing the plans Midgley had for his still, it was enough to convince him to be involved. It must’ve been quite something to make a legend of Nichol’s stature want to join the party.

Located in Melton Mowbray, Leicestershire, Brentingby Gin takes its name from the Hamlet in which the distillery resides.

The concept of Brentingby GIn was devised in 2015. Midgely was working in the oil and gas industry and a friend had suggested he made his own gin. From there he put his heart and soul into it. And that included seeking the very best teacher he could find.

The following year, using the expertise gained from his engineering background, he began designing a bespoke 10 plate still. Nichol came onboard in 2017 and the journey to create contemporary gin, true to the category’s traditions, was well underway. 18 months were spent under Nichol’s watchful eye, learning the trade and perfecting the recipe and Midgely confesses to being worked hard, and allowed to make mistakes by his mentor.

Brentingby Gin was launched in 2018 and Nichol and Midgely remain good friends, with the master distiller continues to advise on Brentingby projects.

The distillery also has an environmental conscience. Located in Melton Mowbray, Leicestershire, Brentingby Gin takes its name from the Hamlet in which it resides. The farm next door to the distillery has a wind turbine, and Brentingby is able to utilise this to power their distillery. A few months after launch, they also began a refill scheme allowing customers to drop into the distillery to top up their bottles for a discounted price. 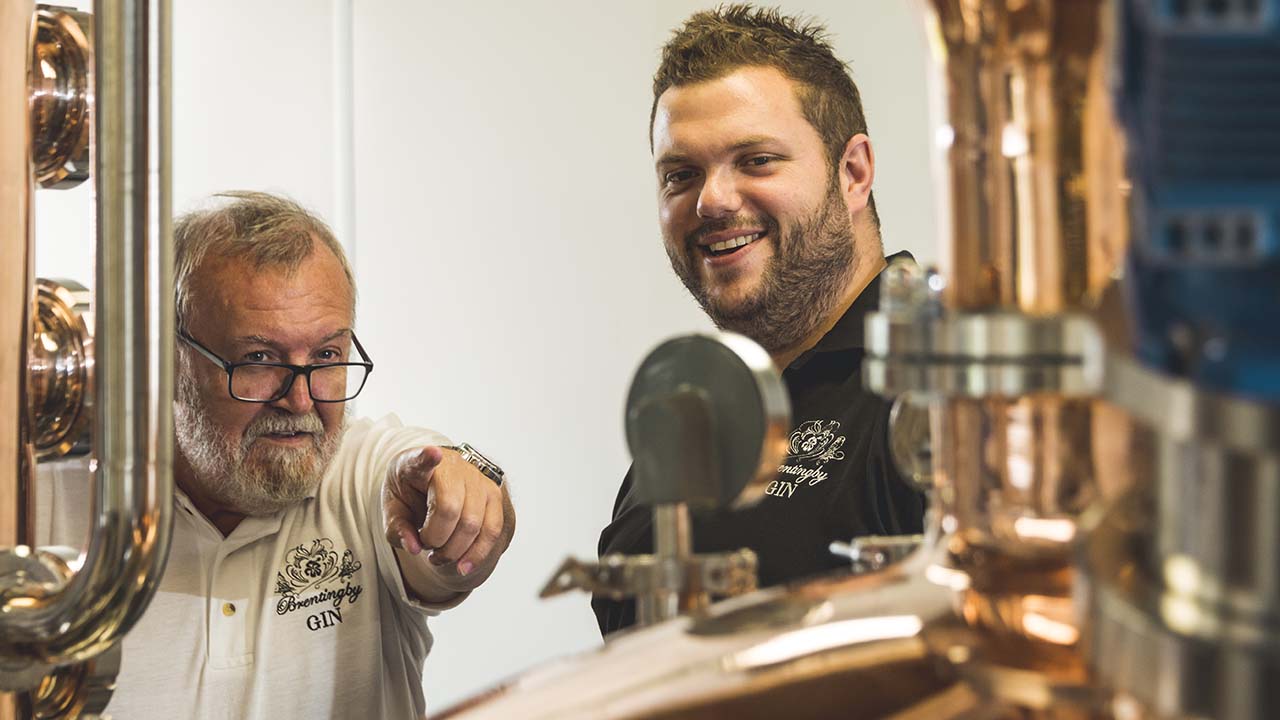 How Brentingby Gin is made

From talking to him it’s clear Midgely is a huge believer in the term ‘craft’ and what that means in relation to gin production. That’s a debate for another day, but there’s no doubting Midgely’s passion for gin production. He follows the process from start to finish, and over his watchful eye, produces around 500 bottles per batch.

The process takes between five to six hours and Midgely won’t even allow himself a comfort break until it’s complete. Brentingby Gin uses eight botanicals to create their flagship London Dry. These are juniper, coriander, angelica, orange peel, hibiscus, birch bark, liquorice root, pink grapefruit. Wheat is used as the base spirit and all eight botanicals are macerated in this during distillation inside Ayanda, the still custom-designed and assembled by Midgely.

The distillate is then rested for about seven days in the tank before being cut back to its bottling strength of 45%. Using the one-shot method means less per batch, but Midgley believes this gives a superior quality gin. 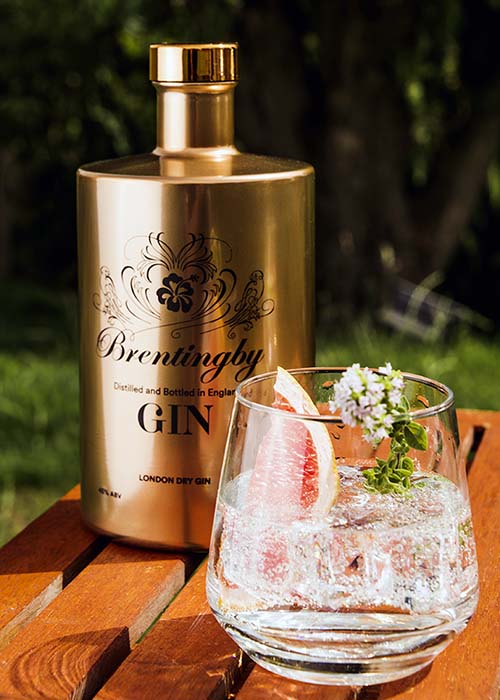 On the palate juniper swirls around joined sweet citrus. Towards the finish, hibiscus adds a delicate floral touch. It’s a really smooth gin to sip.

Brentingby Gin is exactly what they claim it will be – a traditional, juniper forward gin. But it’s an extremely high quality one at that. Beautifully balanced, delicate and smooth, this is not just another gin.

On the nose, it smells as you’d expect. Piney juniper is supported by zesty citrus notes of grapefruit. There’s also a very subtle floral undertone of hibiscus. On the palate juniper swirls around joined sweet citrus.

Towards the finish, hibiscus adds a delicate floral touch. It’s a really smooth gin to sip. While it’s juniper-dominant, no single flavour is overpowering, each playing a supporting role.

As a G&T, Brentingby is highly refreshing. Herbaceous, piney juniper remains the primary flavour, but doesn’t dominate. It’s supported by citrus and floral notes, and there’s a gentle sweetness of liquorice to offset the quinine of the tonic.

I found the hibiscus to be more vocal here, but still flitting around the outskirts of the palate. Such is the amazing balance of botanicals, Brentingby Gin can be taken in many directions, so it’s great for experimenting with different garnishes and tonics.

The recommended serve is a classic tonic, with rosemary and grapefruit to garnish. I also loved it with lime and mint, which provided a slightly sweeter drink, but not too much. And if you want to take it even sweeter, Fever-Tree Elderflower also works well. 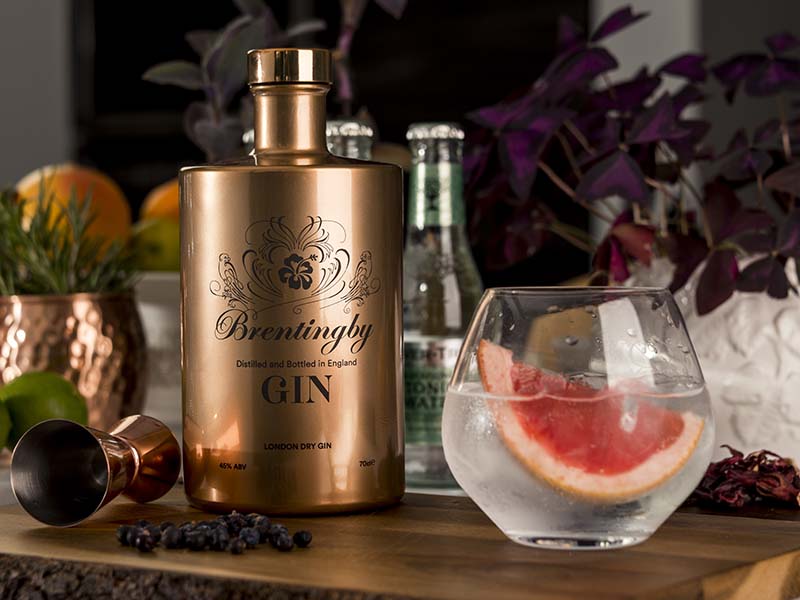 A mix of classic & contemporary

Much like the gin itself, the Brentingby Gin bottle has a mix of both the classic and contemporary. The copper bottle is simple, yet makes a statement, giving an air of luxury befitting of its £35 price-tag. The bottle takes inspiration from a central component of the Brentingby story, Ayanda, the still designed by Midgeley, which he also assembled, after its manufacture.

The logo itself adds a touch of class to the packaging, featuring the hibiscus flower. It’s this which ties Brentingby into Midgeley’s South African roots. One of the eight botanicals in the gin, it’s also a symbol of home for the distiller, growing in abundance along the coast of his childhood home in Durban.

Bruce Midgely started out on his journey with little more than a dream: to create a contemporary take on a traditional gin; one which remained true to how he felt gin should taste.

Three years of planning, designing and learning how to distill culminated in his dream being realised. And he’s done so with aplomb. If you’re looking for something completely different, with unusual flavour profiles, this is maybe not the gin for you. But if your palate desires a beautifully balanced juniper-forward gin, Brentingby is up there with the best of them.