The bottle of Caorunn Gin for this review was purchased by From the Gin Shelf. All opinions are that of the author.

Having celebrated its 10-year anniversary in early 2019, Caorunn Gin has been synonymous with the Scottish gin movement. As one of the early favourites on my gin discovery, it seems fitting to revisit Caorunn to see if it still hits the mark. Read the review to find out.

The Scottish Highlands in a glass

As with many of the Scottish brands of the gin revival, Caorunn is crafted in a whisky distillery – Speyside’s Balmenach – one of the first distilleries to be licensed in the production of Scotch whisky in 1824.

Caorunn (pronounced ka-roon) takes its name from the Scottish Gaelic word for rowan berry, one of the locally foraged botanicals the gin is built around – indeed the distillers state that it “forms the very soul” of Caorunn. 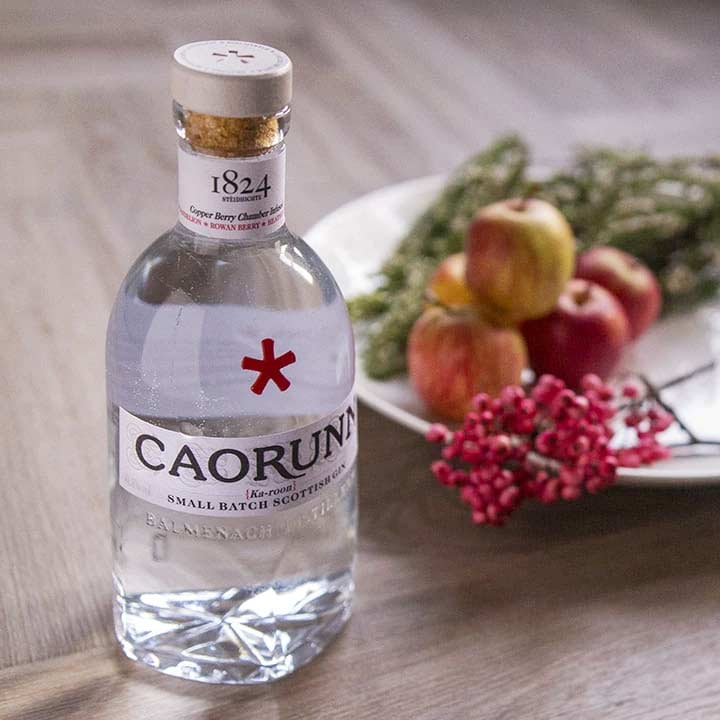 How to serve Caorunn Gin

Caorunn Gin uses 11 botanicals in its recipe but the brand centres around its five foraged Celtic ingredients:

These are foraged by master distiller Simon Buley from the countryside around the Highland distillery. The local ingredients are supported by 6 traditional botanicals which you’ll find in many gins, namely juniper, coriander seed, orange peel, lemon peel, angelica root and cassia bark.

Caorunn is distilled solely using vapour infusion with the world’s only working copper berry chamber (you can read more about the distillation process on the Caorunn website). Dating back to the 1920s, the chamber contains four perforated trays. These allow the botanicals to be spread evenly, creating a greater surface area for the alcohol vapours to slowly pick up their flavours as they pass through the trays.

The depth of the spread is important. Too shallow and the vapours pass through too quickly, which would result in less depth of flavour. Conversely, too great a depth would inhibit the vapours from flowing through.

1,000 litres of grain neutral spirit (GNS) are distilled at a time. The alcohol, vapourised by steam, rises into the berry chamber, before being condensed back into liquid and held in a feint tank. Once all the original grain neutral spirit is distilled, the liquid in the feint is recondensed and passed through the berry chamber for a second time, to pick up even more of the flavours from the botanicals. The resultant spirit is then cut back to 41.8% using pure Scottish water, ready for bottling. 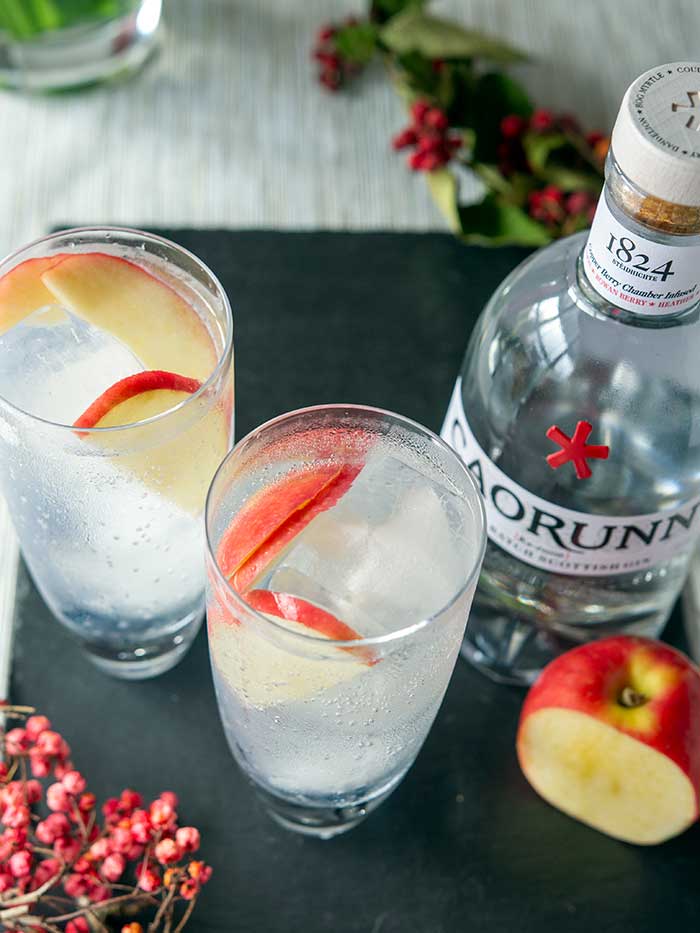 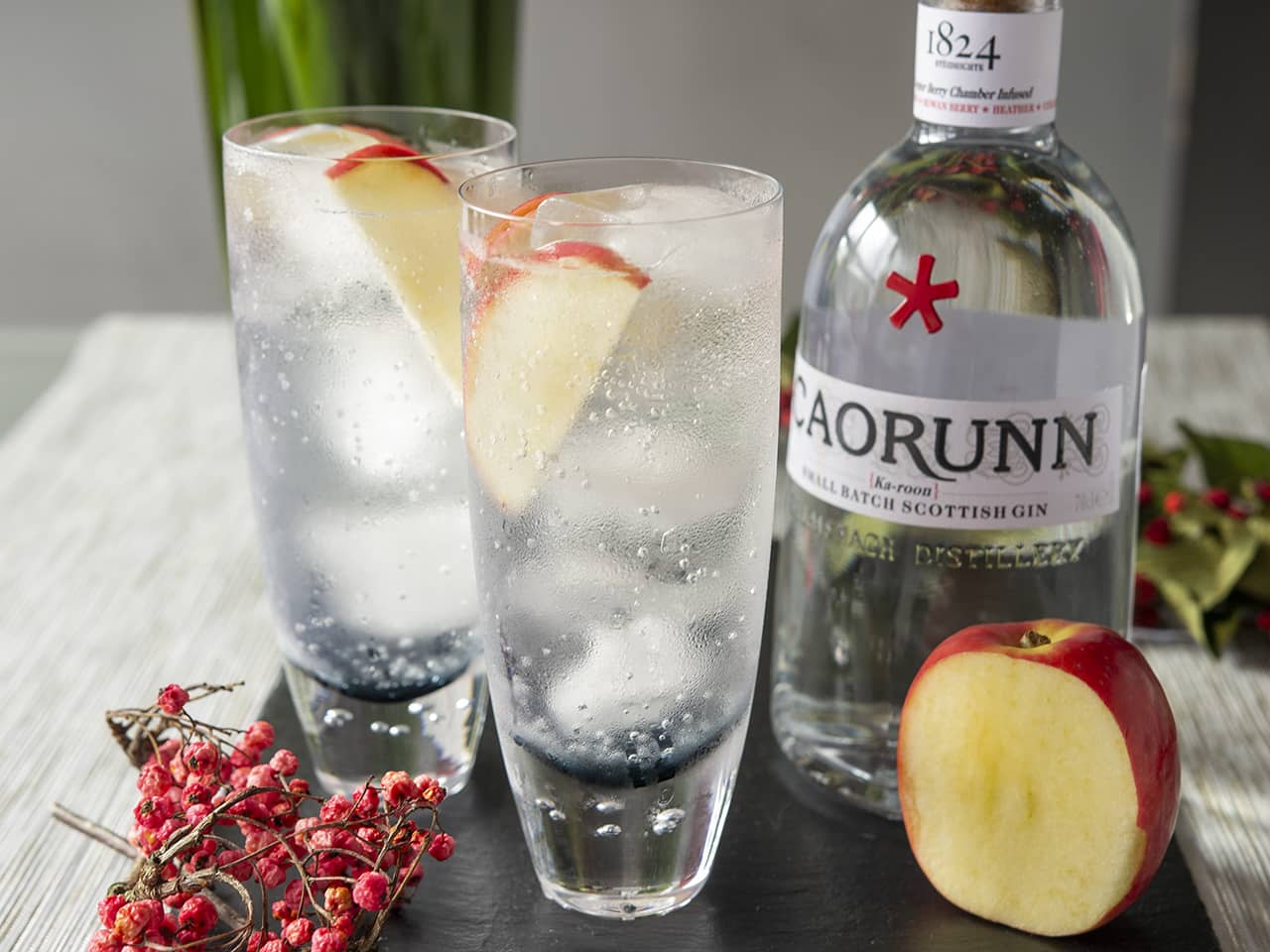 On the nose Caorunn has a bright and aromatic aroma. I also get the faintest hint of apple. It’s hard to tell, however, if that’s because I know it’s in there, given it’s become synonymous with the gin.

To sip, Caorunn is crisp and zingy. Quite floral, with delicate citrus in the background. The finish is long-lasting. A gentle spice lingers on the tongue well after you’ve put the glass down, while a dry juniper leaves its mark.

It’s a gently balanced gin. No single flavour really stands out above the rest. They all work together in harmony but it remains a gin that’s full-bodies and complex.

Adding tonic opens up the florals and it’s a crisp and fresh G&T. Caorunn recommend serving with slices of pink lady apple as their signature pour. I actually preferred it with a twist of orange peel to bring out more citrus and a little sweetness to the balance. 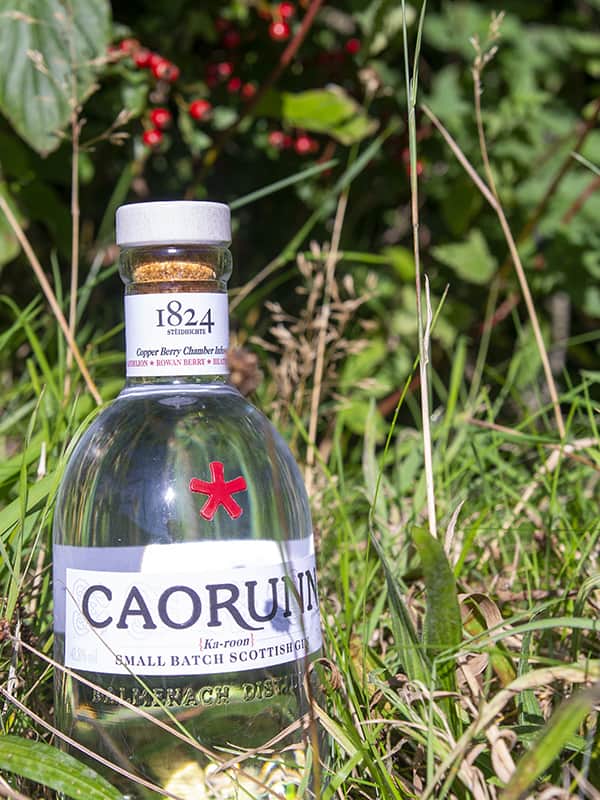 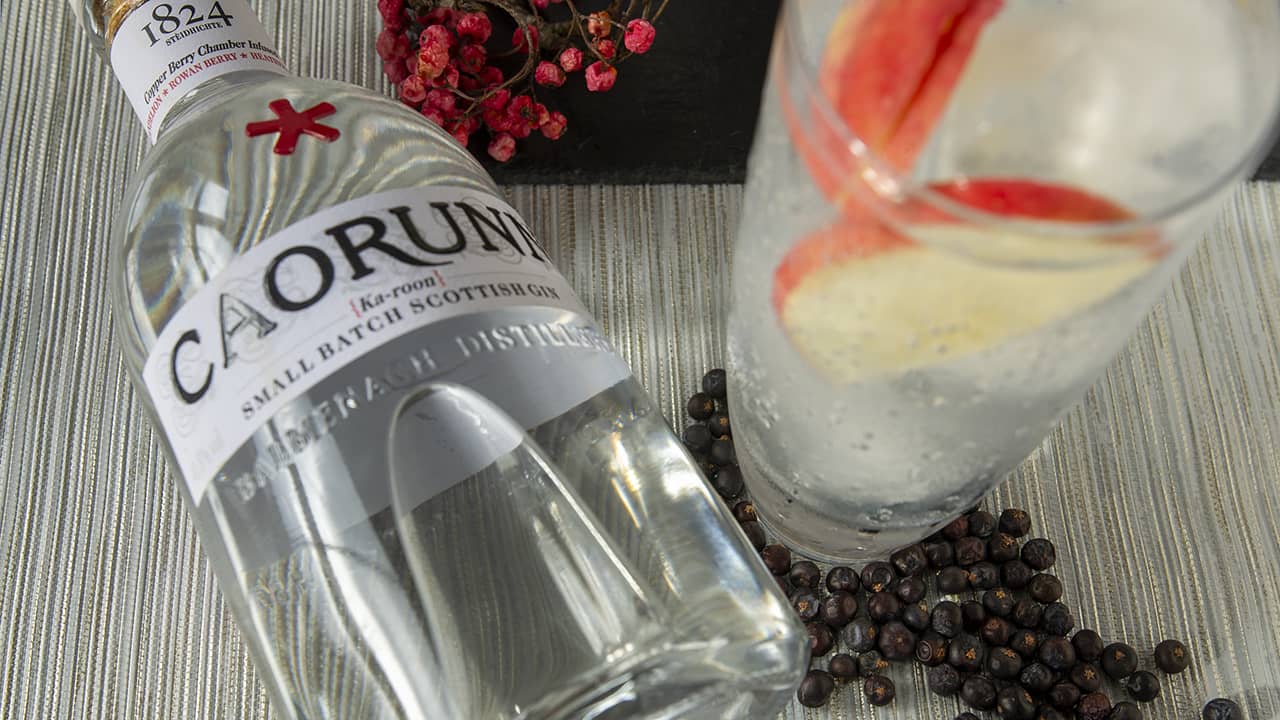 To complete the brand and share their highland spirit with the world, Caorunn have chosen a bottle that really fits well with their story. Its pentagonal shape represents the five Highland botanicals in the gin and gives that distinctive Caorunn contour that the brand’s become synonymous with over the years.

The bottle had a refresh in early 2018 courtesy of design agency JDO, but it still maintains the characteristic shape, with its five-point logo front and centre. The bottle is definitely iconic. It’s by no means as striking as many of the newcomers to the market, but it’s as distinctive to Caorunn as its signature serve, allowing it to stand out without the need to shout.

The bottle is definitely iconic and as distinctive to Caorunn as its signature serve.

Caorunn Gin is synonymous with “Brand Scotland”, possibly even more so than the likes of Hendrick’s, given the strong focus on its Celtic branding. Do I love it as much as I did when I first discovered it? Probably not, but I think that’s more to do with how my palate has changed over time.

Caorunn is a classic; an iconic Scottish gin which, despite its age is a comparative elder statesman in the category. It’s a crisp, clean gin and the foraged botanicals really work in transporting you to Speyside. With its accessible price tag, it’s a great place to start for newcomers to the category. But it remains a must for any gin collection.

Other London Dry gins you may be interested in include:

With its accessible price tag, it’s a great place to start for newcomers to the category. But it remains a must for any gin collection.

What tonic is best with Caorunn Gin?
A crisp classic tonic works best such as Schweppes Signature Collection or Fever-Tree Indian Tonic water.

Where is Caorunn Gin made?
Caorunn Gin is distilled in Speyside, Scotland, at Balmenach Distillery.

How much does Caorunn Gin cost?
Expect to pay between £20 – £30, depending on special offers available in supermarkets and online retailers.