The bottle of Cotswolds Dry Gin was purchased by From the Gin Shelf. All opinions are that of the author.

Launched in 2014, Cotswolds Distillery is one of the great craft spirits success stories, with a range of whisky and gin, as well as a vibrant visitor experience. Read my review of their flagship Dry Gin including how it’s made, what it tastes like, and what causes the cloudy gin and tonic it’s famed for.

Founded by New Yorker, Dan Szor, The Cotswolds Distillery was launched in 2014. Having lived in London for many years, Szor, decided he wanted to leave his career in financing to spend more time with his family in the Cotswolds.

A lover of whisky, he couldn’t understand why no one had made the spirit in the area. So, putting most of his “life saving on the line,” he purchased some land near his home and established The Cotswolds Distillery.

With the help of  Harry Cockburn (formerly of Bowmore Distillery) and Dr Jim Swan (known as the Einstein of Whisky), Szor set about fulfilling his dream.

As well as whisky, the distillery also produces a range of gins, including their flagship Cotswolds Dry Gin, the subject of this review.

Cloudy in the glass

One of the things that Cotswolds Dry Gin is famed for is the fact it becomes cloudy when water is added. This was once frowned upon, but in recent times has become less of an issue with critics and consumers alike.

So, why does it happen? It’s all to do with the concentration of essential oils in the gin. These oils are dissolved in the alcohol, but as soon as water is added, they come out of suspension, giving the cloudy effect known as “louching”.

You’ll often notice it in other gins but it’s the sheer volume of oils within Cotswolds Dry Gin that makes it so pronounced. Peer through the glass and you’ll actually see the oils floating around! 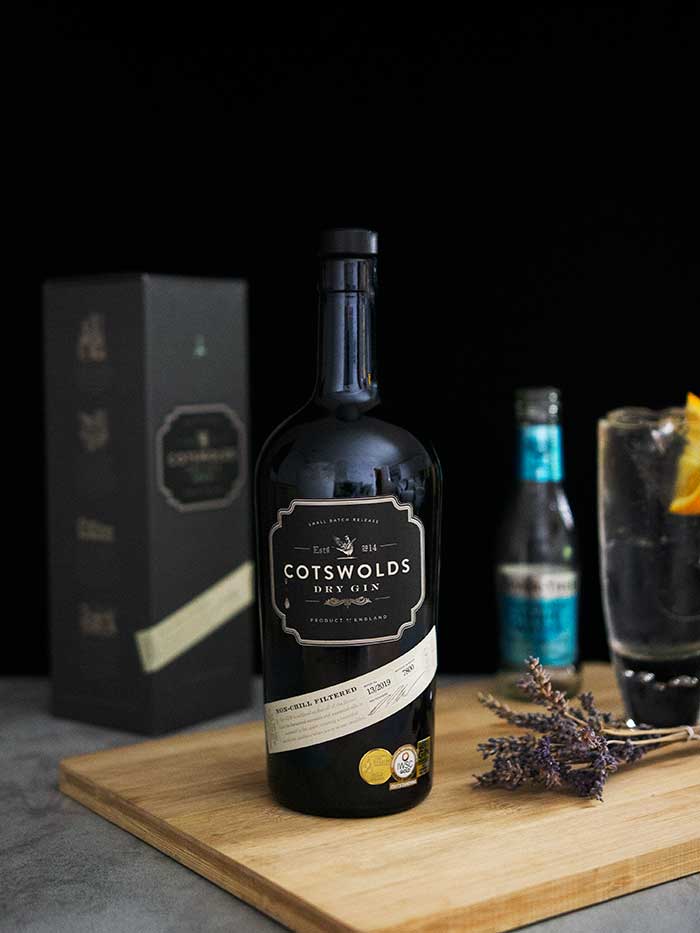 How to serve Cotswolds Dry Gin

Cotswolds Dry Gin is recommended to be served as a gin and tonic with the perfect serve as follows:

Read my top tips on making the perfect gin and tonic.

Cotswolds Dry Gin is made using London Dry process. Nine botanicals are used in the recipe:

The grapefruit and limes are peeled onsite by the bottling team, while the signature lavender is sourced locally from a Cotswolds farm, some 20 miles from the distillery.

As with any gin, the ‘cut points’ in the distillation are key to the process. A relatively small heads cut is made to allow a larger proportion of citrus oils to be collected. A high tails cut is also made, which yields a lighter and zestier style of gin, removing heavy coriander notes.

The hearts are collected at roughly 83.5% ABV. Multiple batches are blended together to allow for greater consistency, before being rested for five days to allow the flavours to marry. The gin is then diluted to bottling strength of 46% ABV with RO water.

Crucially, the spirit is not chill filtered after distillation as this would remove a high proportion of essential oils from the gin, altering the flavour (and appearance) of the final liquid.

Cotswolds Distillery state that they use “10x the average weight of botanicals for a premium gin.” But what does this actually mean? When digging a little further, I was told that, from their experience, Cotswolds found they were were using a higher botanical load than many gins, and “up to 10x higher.”

I’m not a massive fan of claims that don’t make direct comparisons, as it feels a little… meaningless. That being said, what is clear from the louching and flavour Cotswolds Distillery do use a high botanical mass in the recipe. There’s not a gin I’ve tried that has this character in such a profound way.

Distillers do use an increased botanical mass when using a multi-shot process. This is effectively where a ‘concentrate’ is made and then the gin is ‘stretched out’ with additional Grain Neutral Spirit (GNS) before diluting with water. This allows a much higher yield per distillation than with single-shot distillation, where only water is added after distillation.

While Cotswolds use this high mass of botanicals, they follow the single-shot process. 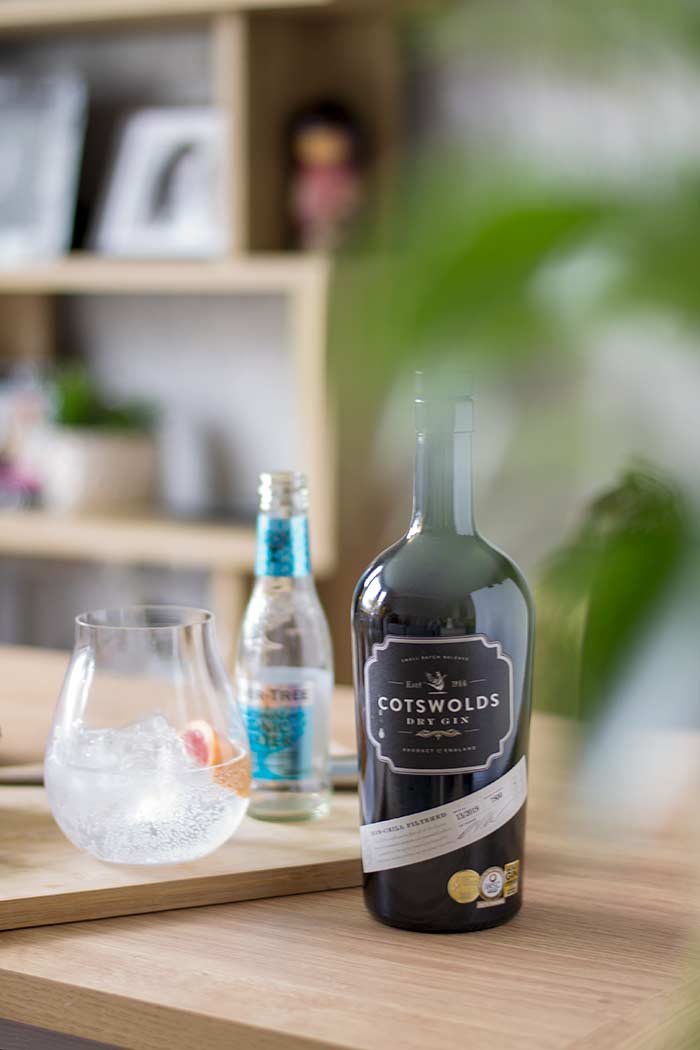 The spirit is not chill filtered after distillation as this would remove a high proportion of essential oils from the gin, altering the flavour of the final liquid. 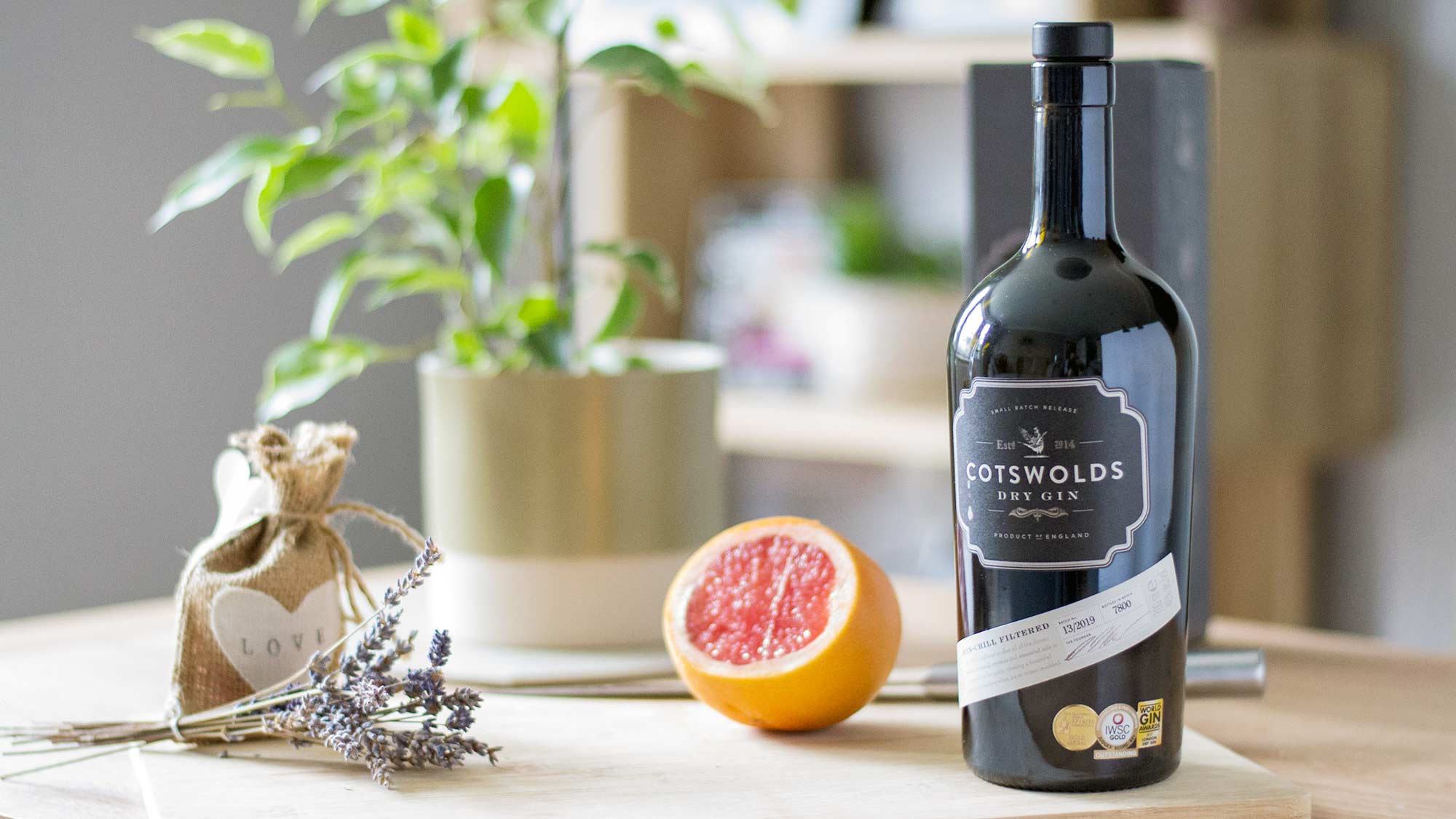 Cotswolds Dry Gin has some seriously intense aromas and you barely need to put your nose near the glass. Floral notes are prominent, like walking through a field of lavender at the height of summer. Grapefruit peel and a hum of juniper are in toe, with a subtle menthol aroma underneath.

Neat over ice, the first thing you notice is the louching as a spot of water melts into the gin.

To sip, there’s a huge hit of lavender – it’s like a flower bomb! Juniper follows up trying to fight through the floral field before giving way to subtle citrus and a black pepper finish.

With a splash of tonic, the louching in the glass is off the charts – like nothing I’ve ever seen in any other gin. The floral notes become much more pronounced and probably a bit overpowering for me here.

Add a bit more tonic (2:1+) and drop in a wedge of citrus like orange or grapefruit and it balances the lavender out beautifully. At this ratio, Cotwolds Dry Gin is one unbelievably good gin and tonic! 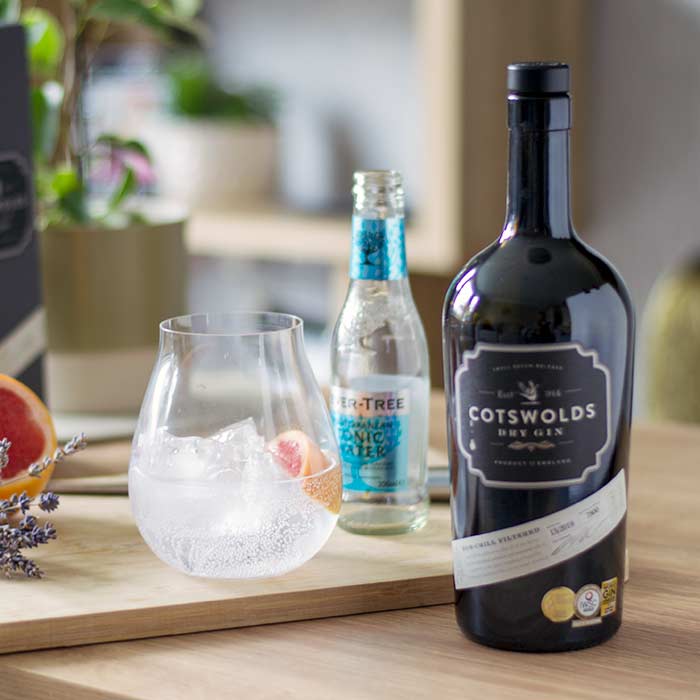 Cotswolds Dry Gin is one of the modern classics of British gin in my opinion. Where once a gin that goes cloudy was considered a defect by some, Cotswolds Distillery have completely ‘owned’ this element – and I’m so glad they did! It’s a gin with an incredible depth of flavour and one of the best gin and tonics you could hope to try.

Such is the intensity in taste, it also really lends itself to experimentation in cocktails, as well as classics like the Martini or Negroni.

Priced at £30 – £35, it’s solid value, particularly for a gin with a higher than average ABV (the higher the ABV, the higher the tax). You can also often purchase it in a presentation box, which makes it great for gifting!

Other London Dry gins you may be interested in include:

Such is the intensity in taste, Cotswolds Dry Gin really lends itself to experimentation in cocktails, as well as classics like the Martini or Negroni.

What garnish goes with Cotswolds Dry Gin?
Cotswolds Distillery recommend a garnish of pink grapefruit and a fresh bay leaf. I enjoy it with a wedge of orange.

Why is Cotswolds Dry Gin cloudy?
Cotswolds Dry Gin has a high concentration of essential oils which are dissolved in the gin. As water is added, these oils come out of suspension, thus giving a cloudy appearance. This happens in many gins, but is particularly prominent in Cotswolds Dry Gin.