The bottle of Four Pillars Rare Dry Gin for this review was purchased by From the Gin Shelf.
Images: Four Pillars/Anson Smart

While it’s perhaps best known for its wines, Australia’s Yarra Valley is home to one of the country’s most popular gin brands – Four Pillars. Read my review to find out all about this pioneer of the Australian gin scene.

Founded in 2013, Four Pillars has been at the forefront of the vibrant Australian gin boom. And the story of the brand all starts with a conversation between two wine industry veterans, Cameron Mackenzie and Stuart Gregor. The original plan was to make a tonic, but after 72 hours that quickly turned to gin! Together with Matt Jones, they created Four Pillars.

As avid gin fans with a great collective knowledge of the wine industry, I guess it seems fitting to create a gin in one of the country’s great wine regions. Their name is simple but effective; it stands for the four ‘pillars’ that form the brand’s ethos: 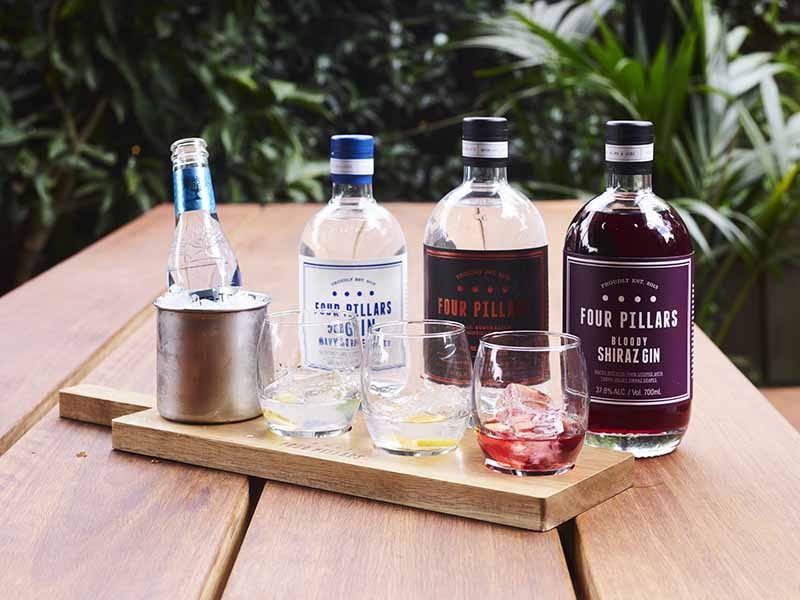 Pillar one – the stills

Fittingly, Four Pillars (currently) have four stills. These are Wilma, Jude, Eileen and Beth and are made by renowned German manufacturer CARL.

It took a year to build Wilma and the still was the first of its kind commissioned in Australia. She produces gin at an extremely high purity – an incredible 93.5% to be precise – and each batch is around 460 bottles at a time.

“Yarra Valley and Melbourne water is among the very best in the world,” Four Pillars claim on their site, stating that it’s delicious, even straight from the tap.

Rainwater across the region naturally filters through various flora and rocky streams before entering Melbourne’s protected catchment dams. This is then triple filtered by the distillery before being used to bottle Four Pillars’ gins.

It took Four Pillars 18 months of experimenting with their recipe before deciding on the botanicals which make up their gin. They’re a mix of native ingredients, and those from Asia and further afield.

PILLAR 4: A LITTLE BIT OF LOVE

What defines craft gin? It’s a question that gets asked a lot. Is craft gin even a ‘thing’? Four Pillars believe it is, and when you distill it down (pun intended) it’s all about love!

Love for gin; love for their stills; love for the craft of distilling; love for stories and love for people. The team at Four Pillars “love” what they do. And that more than comes through in their gins!

How Four Pillars Gin is made

Learning about Four Pillars’ distillation process it’s clear that they take great pride in how their gin is made. For the base, they source wheat spirit from New South Wales. This is then diluted to 30% ABV before distillation commences.

450 litres are then added to the pot of Wilma, along with the nine dry botanicals for maceration. The tenth and final botanical is orange, and quite unusually, these are distilled in their whole form, through vapour infusion. The vapours from the pot rise to the botanical basket above where the oranges are placed, steaming them to release their delightful flavour.

Over seven hours, the liquid condenses and recondenses through the pot, basket and seven plates on the column still. These remain closed throughout to further purify the spirit, acting as a “mini-distillation” through each plate. This helps to make the gin super-smooth and comes out at an impressive 93.5% ABV. It’s then diluted down to 41.8% ABV and rested for a couple of weeks before bottling.

Why whole oranges? Well, put simply the peels didn’t work well with the spices in the gin, coming out rather candied. It was Dr Klaus Hagmann from CARL who suggested the fresh fruit. While unconvinced, the team at Four Pillars gave it a shot and describe the first run as “a revelation!” 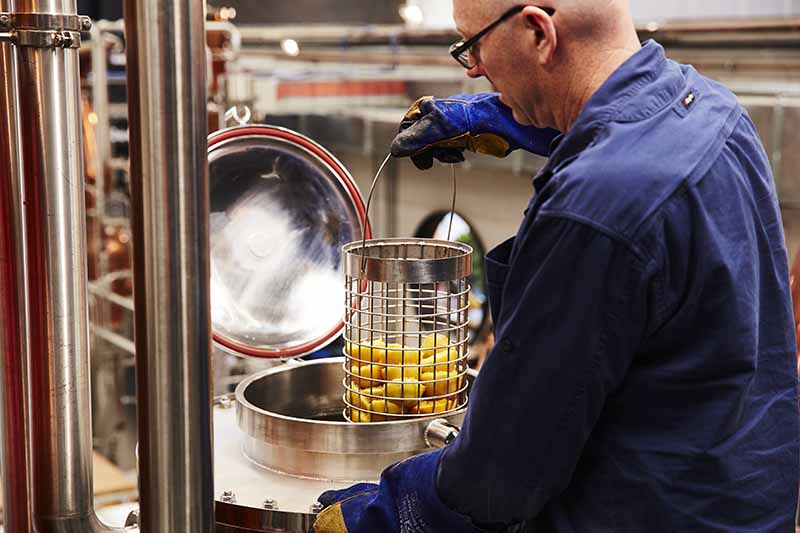 Sourcing organic oranges from various Australian producers throughout the year, they vary the volume in each batch throughout the season, due to the differences in the oils from different varieties. The types with more pith result in cutting the distillation shorter than with other batches, as the tails has a stronger pith-character than normal.

This means less gin, but it’s one example of the dedication to the craft Four Pillars exhibit. Each batch of gin needs to be made to the same high standard as the last, regardless of seasonality. 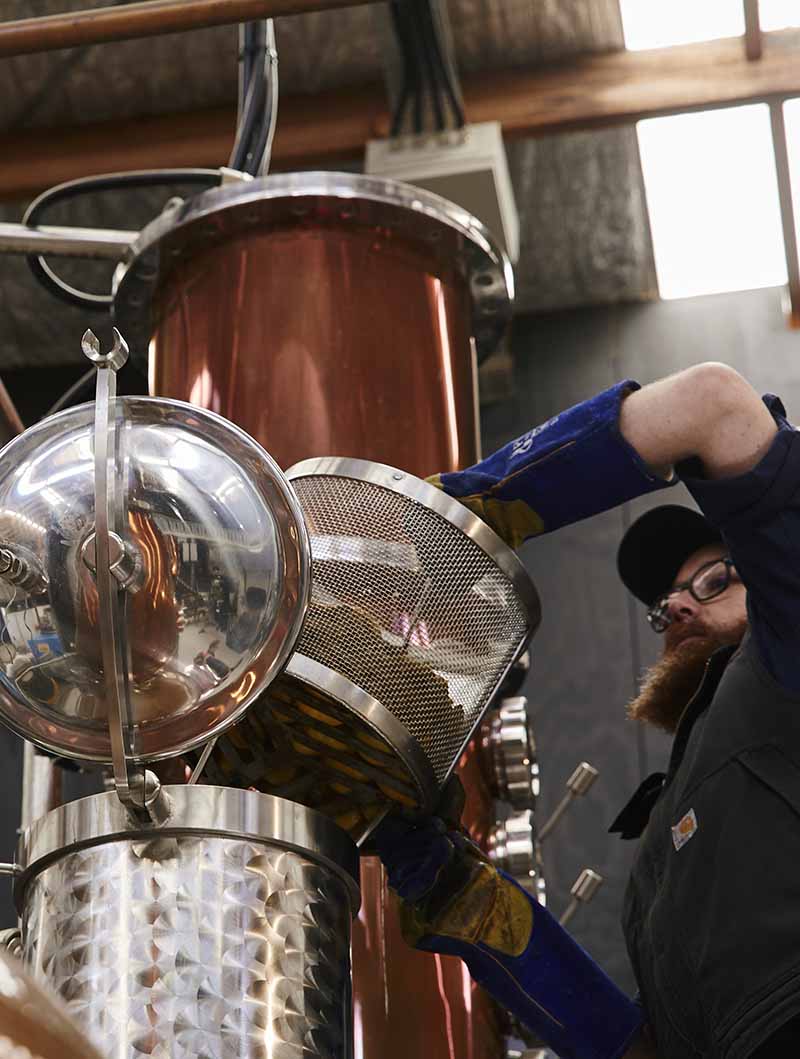 While a great brand story is important, it absolutely must deliver on flavour. And it’s fair to say Four Pillars Rare Dry Gin is more than up to the task.

On the nose spice and citrus dominate – unsurprisingly given the botanical mix.

With a sip, sweet orange leaps forward, followed by a hint of subtle florals. The finish is extremely smooth. Pepper providing spice rather than heat, with a hint of liquorice from the anise. Juniper is there throughout, but never takes the main stage, preferring to be the support act for the dominant citrus and spices.

As a gin and tonic, Four Pillars is much heavier on the citrus of the orange. You can really tell they’ve used the fresh fruit as you can almost taste the juice, but it’s perfectly balanced by the spices throughout.

There’s a delicate sweetness of liquorice too from the anise and this far more prominent with tonic. I found the liquorice flavour became even stronger, the higher the ratio of tonic to gin, so if that’s not your ‘thing’, keep the tonic to gin ratio on the lower side.

Indeed, for my palate, this is definitely one where less tonic is more, somewhere in the region of one and a half/two parts tonic to one part gin being my ideal sweet spot. Too much and the liquorice became too dominant. Indeed, the distillery themselves suggest 2:1 tonic to gin.

While great with a classic tonic, I’d recommend Fever-Tree Mediterranean. 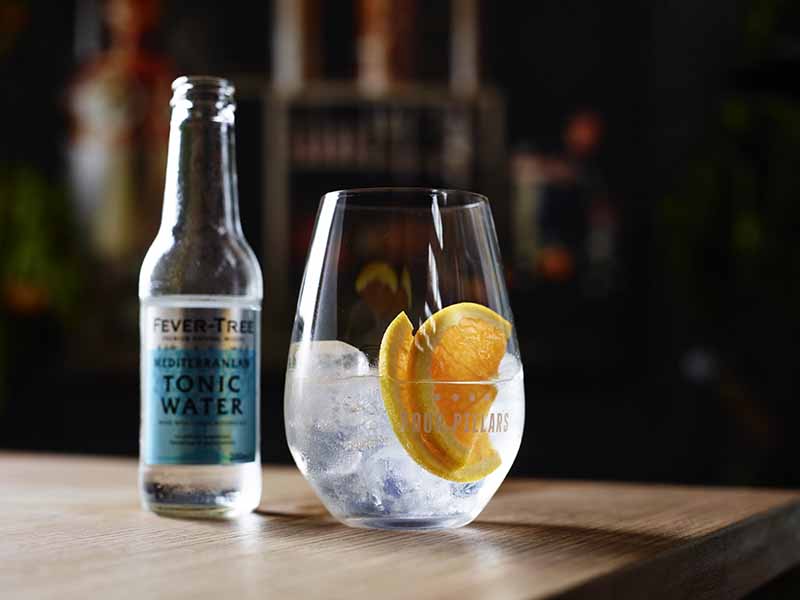 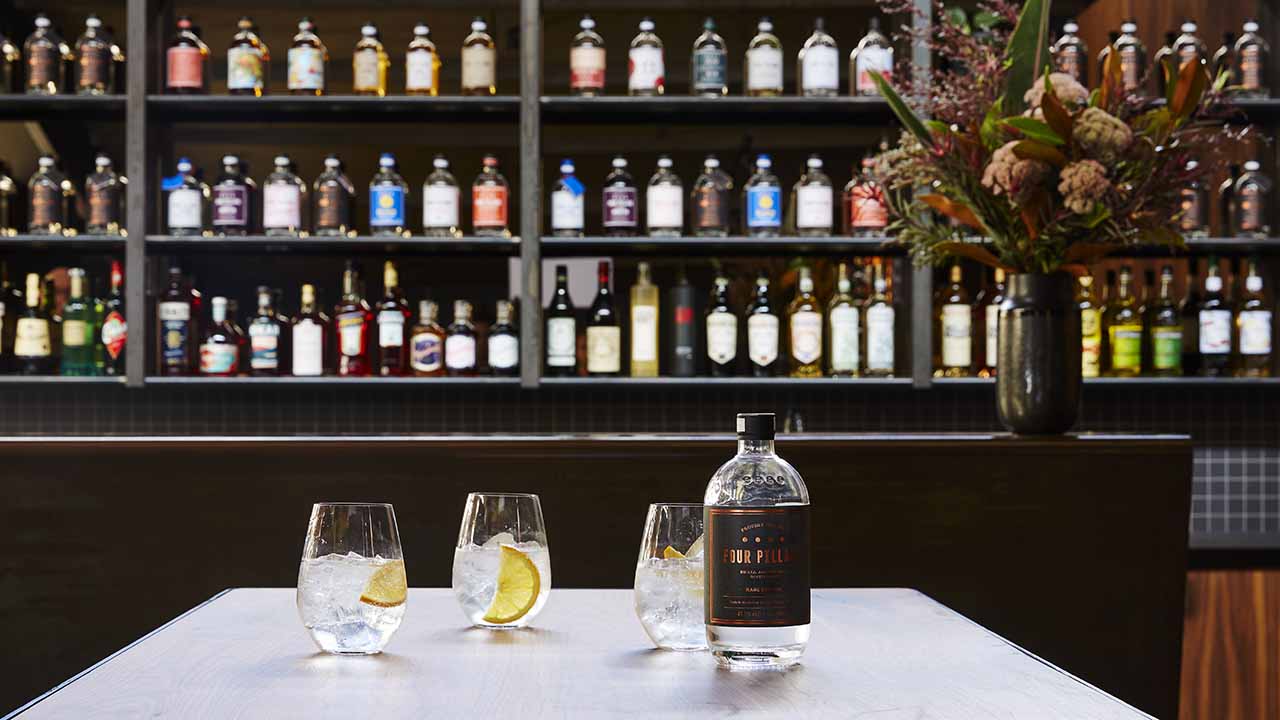 Four Pillars is a cool, contemporary gin brand. They embody a lot of what I love about the gin revival – passion, great storytelling, innovation and provenance. It all combines to make Four Pillars one of Australia’s most talked about gins.

The word ‘innovation’ is often overused, but it certainly applies to Four Pillars in spades. If you’ve ever had a taste (or even a look) at their lineup of gins, it’s clear they’re guys who are pushing boundaries. Not in a shiny, coloured, sparkly kind of way, but in a direction which is in keeping with the category.

Rare Dry is one of four gins which make up their core products, along with Spiced Negroni, Navy Strength and Bloody Shiraz. Given Stuart and Cameron’s wine background, and indeed where the distillery’s located, an experimentation with grapes was, perhaps, inevitable. Despite this, their Bloody Shiraz was probably not what anyone would’ve expected, steeping Shiraz grapes in their Rare Dry Gin to create a truly unique and exceptional product.

Further-highlighting their innovation they partnered with the amazing Hernö Gin from Sweden to celebrate the best of the north and south hemispheres with Dry Island Gin. The packaging for Four Pillars fits perfectly with their brand. It doesn’t shout in any way; it’s clean, modern and simple. And it’s by doing so that it stands out.

Four Pillars is a cool, contemporary gin brand. They embody a lot of what I love about the gin revival – passion, great storytelling, innovation and provenance.

Four Pillars is an absolute rock star in the category; original, contemporary and cool. A huge player trailblazer in the vibrant Australian gin scene, for me it’s one of the top distilleries in the world.

Rare Dry Gin is a delight from the first sip to the last and it’s a must for every gin fan to have on their shelf.

What type of gin is Four Pillars Rare Dry Gin?
While is uses a London Dry process, and is therefore classified as such, Four Pillars doesn’t have the classic flavour you’d expect from a classic London Dry and is more contemporary in nature.

What garnish is best with Four Pillars Rare Dry Gin?
Best served with a wedge of orange.