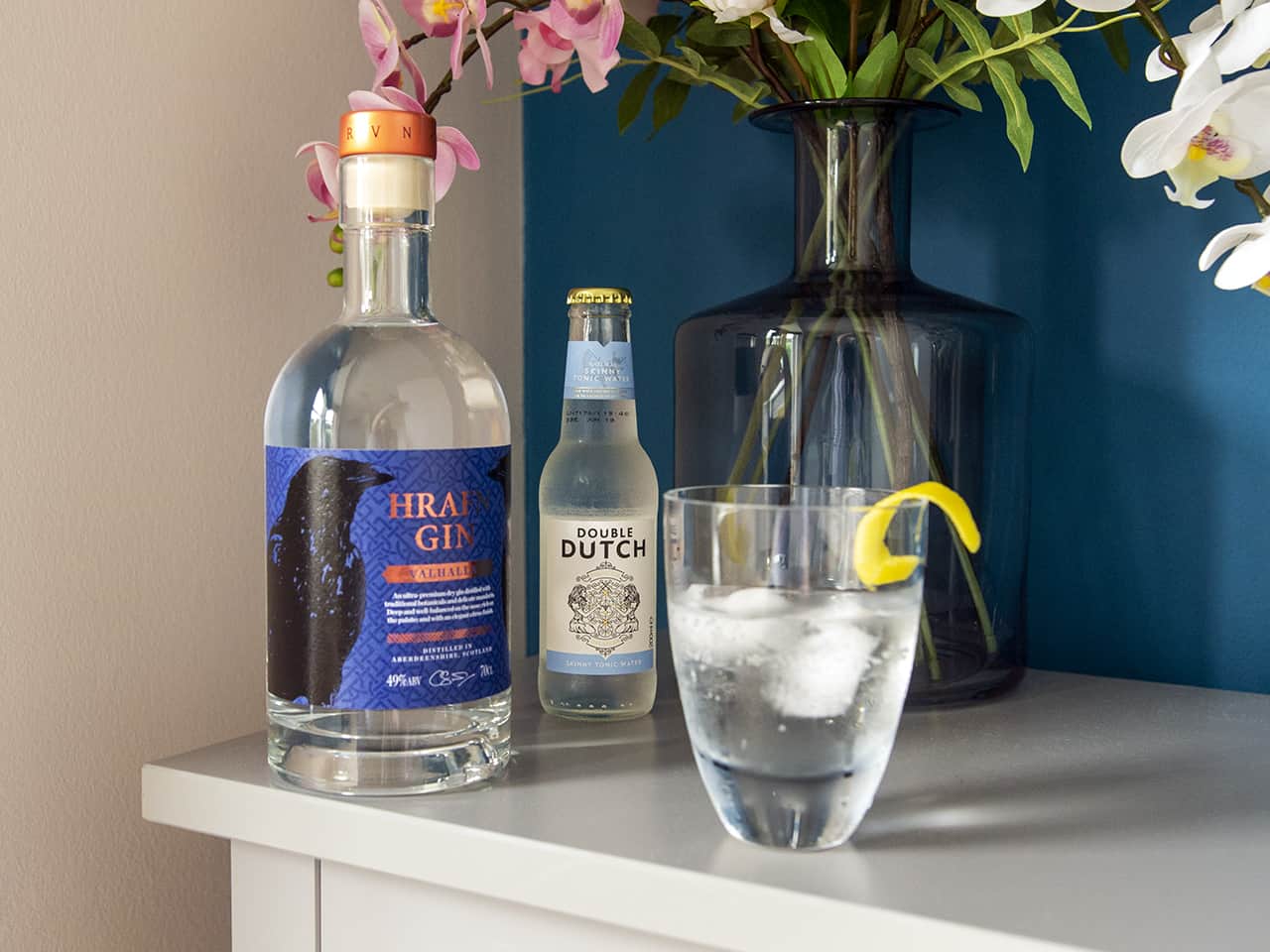 The concept for HRAFN Gin was born under the stars on the Isle of Islay, in Scotland’s Inner Hebrides. Taking inspiration from whisky, find out more about their latest expression, Valhalla.

IN A HURRY? Click the links below to take you to the relevant section in the review: process, botanicals,  how to serve, tasting notes, packaging, verdict

Born under the Islay stars

It perhaps seems fitting that a new Scottish gin brand was devised after visiting the home one of the country’s biggest icons in the category. Callum and Peter Sim had just enjoyed a visit to Bruichladdich Distillery. The famous distillery is a place of renowned whiskies, and more recently, The Botanist Gin.

That evening, a conversation sparked the realisation of a dream. Whilst sitting under the Islay stars sipping Laphroaig, another of the island’s whiskies, discussion soon turned to how they’d make a gin with the depth and finish as good as the liquid in their glass. And a few months later Raven Spirits was founded.

In Norse tradition, two ravens, Huginn and Muginn, served the king of the gods, Odin.

The name was taken from Norse mythology, which Callum has always been fascinated by. Ravens have long been a symbol of mythology in many cultures. In Norse tradition, two ravens, Huginn and Muginn, served the king of the gods, Odin.

Whilst at the distillery, a Raven landed close to Callum and stared him in the eye. The fascination with Viking mythology and the chance crossing of this raven, was the clincher. Two ravens for two brothers.

The brand name, HRAFN (pronounces ra-vn), simply means “raven” in old Norse. This theme continues with both their Thought & Memory and Valhalla gins. Indeed Huginn and Muggin means “thought” and “memory” in Old Norse, while Valhalla is where the Vikings believed half their kin went after they died in battle. 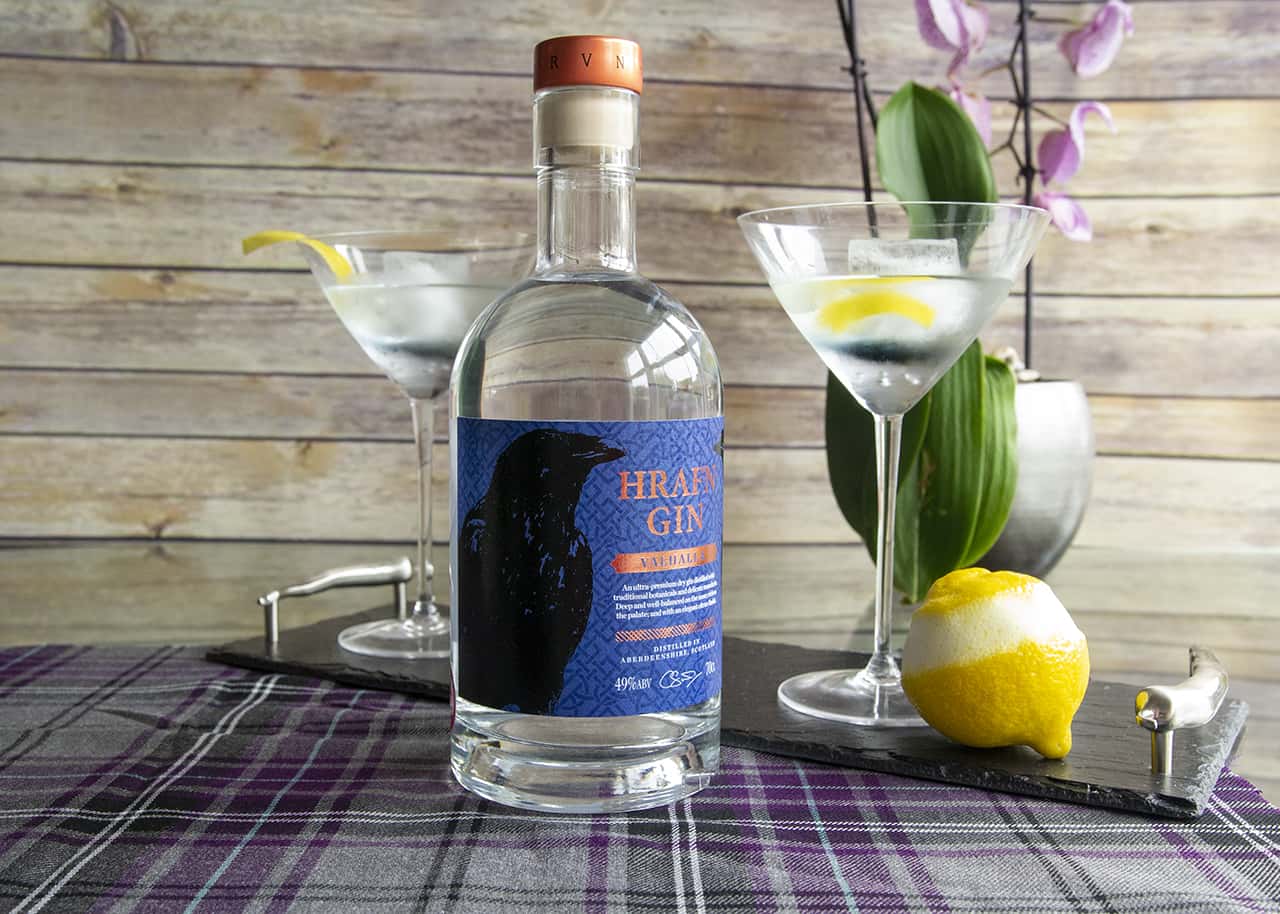 How HRAFN Valhalla Gin is made

Raven Spirits’ gins are contract distilled at nearby Deeside Distillery. As well as being huge gin fans, the Sims also have a great love of whisky. Their passion saw them taking inspiration from both, and central to HRAFN gins is the flavour journey. The length of distillation time is key to creating this. Valhalla takes even longer to distill than its predecessor Thought & Memory, with Raven Spirits stating it takes more than three times longer “standard gins”.

“Knowing how the different botanicals react is important in developing a gin and also, and this is crucial, how the distillation process will affect the taste.” Peter Sim

Distillation follows a classic London Dry one-shot method, with no macerartion of botanicals beforehand. Just seven botanicals are used and these come from a variety of locations including Macedonia, Morocco and Poland. Wheat is used as the base spirit.

Their signature botanical is mandarin, supported by juniper, cubeb, cassia bark, angelica, orris root and coriander. The exact variety of mandarin used is a secret known by few. After distillation, the gin is rested in the tank for four weeks before cutting back with Deeside mineral water. Raven Spirits explain this is to allow the flavours to settle and mellow, and allows for quality control, ensuring no change in the spirit after bottling.

*Care should be taken with the ratios of water/tonic used 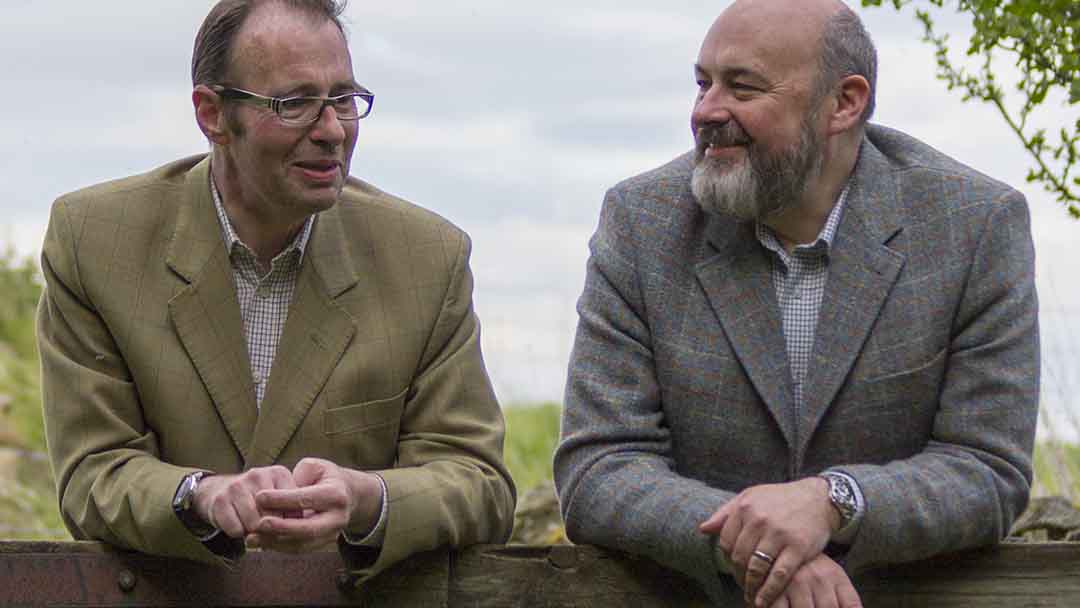 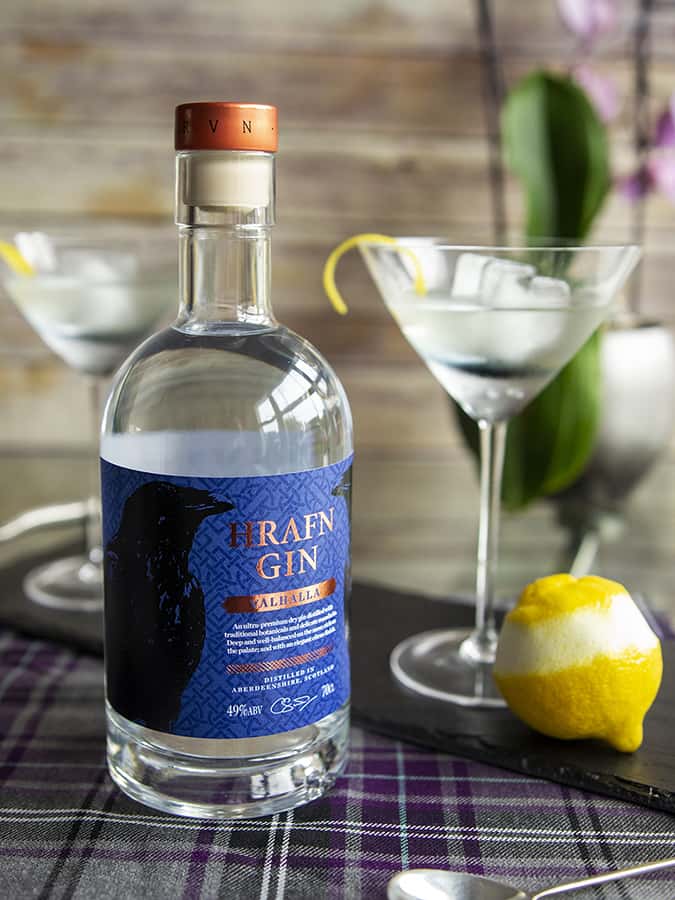 Sipping neat and juniper is at the front of the palate with spice from the cubeb and cassia bark. A huge swirl of mandarin makes for a long crisp finish.

Inspired by whisky, Valhalla is designed to be a sipping gin. At a robust 49% ABV its flavour journey is slightly different from its sister gin, Thought & Memory. Given the botanical mix, the tating notes are not hugely surprising, with juniper, spice and mandarin all present.

As you nose, mandarin leaps out the glass. It’s as if the juice from the fruit has been freshly squeezed. At the 49% ABV, juniper is also fighting to the fore, supported by delicate spices.

Sipping neat and juniper is at the front of the palate with spice from the cubeb and cassia bark. A huge swirl of mandarin makes for a long crisp finish. It’s an incredibly smooth and creamy gin, with huge depth of flavour. There’s a little earthiness there too from the angelica and orris root to offset the sweet spiced mandarin.

The first thing you notice as you add a splash of tonic is there’s a spot of louching. This is a cloudy effect which is a result of the oils from the citrus reacting with water. Looking closely you can actually see the oils separating.

Louching has traditionally been seen as a flaw, and while it’s not the nicest sounding word, recently perceptions have changed with some. Personally, I don’t see it in a negative way, and it can really alter the flavour of the gin quite dramatically (in a good way).

In Valhalla’s instance, it brings out more of the sweet citrus, even with just a small amount of tonic added. The spice dies down rapidly and juniper plays a much more supporting role. There’s also an almost sherbet-like flavour to the finish.

Given the way it changes the flavour profile, you need to be precise about the volume of tonic used to find your sweet spot. Raven Spirits, however, recommend being hugely conservative. 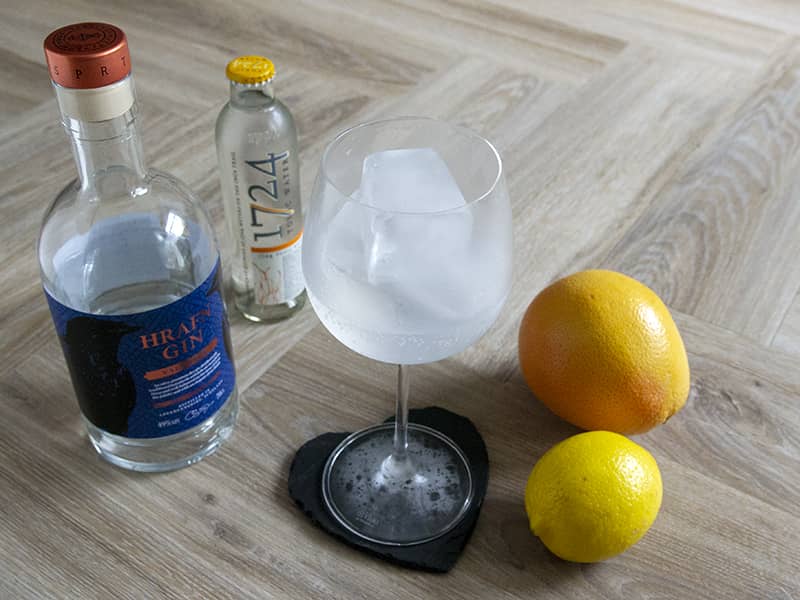 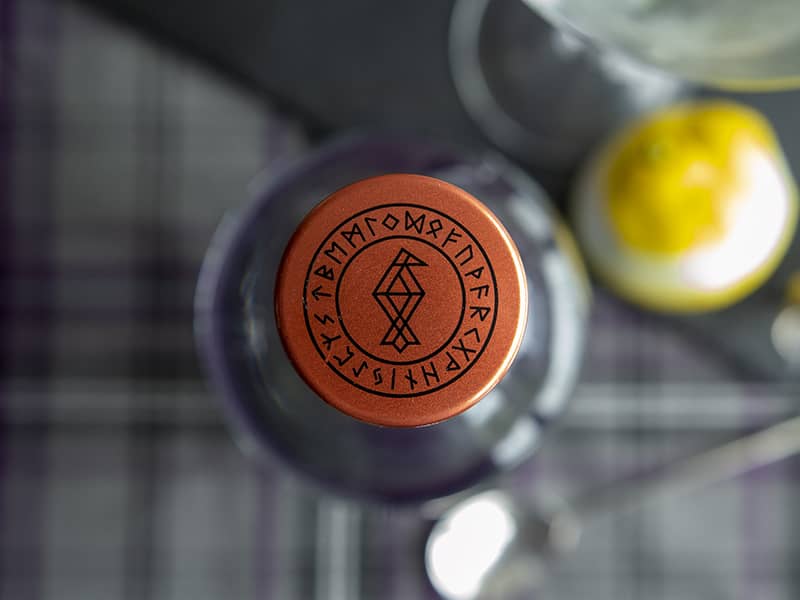 You can have the best liquid inside, but if the bottle doesn’t look good, it’s just not going to sell. While it’s not the most beautiful in the world, I find the bottle quite fascinating (perhaps that’s because I shared a similar love of Vikings as a child!?).

It’s in keeping with the brand story, as all good packaging should be. There are two Ravens on the on either side of the label, linking the Norse mythology of Huginn and Muginn again. The design of the ravens of Odin is taken from an engraving by US artist Larry Vienneau. The blue label ties HRAFN Gin to its Scottish homeland with an underlay of Celtic knots.

My favourite part of the design is the stopper, where their logo proudly sits, the letters spelling “RVN SPRTS” in Old Norse. Lastly Callum’s signature on the label is a nice finishing touch.

It’s safe to say HRAFN Gin Valhalla is a seriously good liquid. It was a joy to get to know its flavour profile for this review and while it’s different from what I’d usually go for, Valhalla’s really converted me on sipping gins. Price: around £44 Buy or view stockists on Raven Spirits’ website 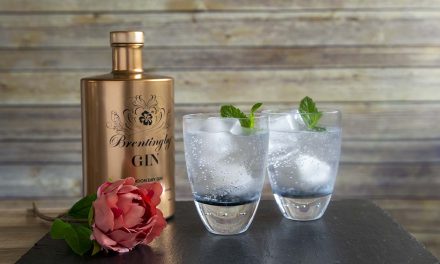 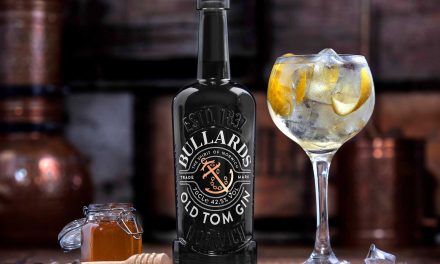 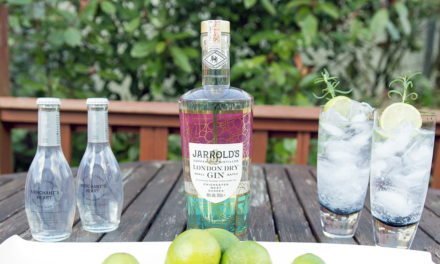 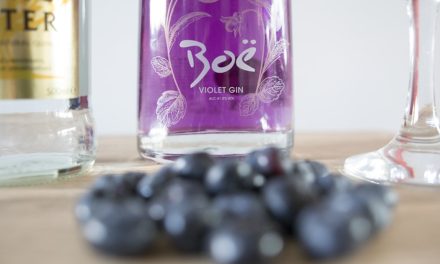