From the remote Outer Hebrides comes a unique spirit – Isle of Harris Gin, the first product from Isle of Harris Distillery. Founded by Anderson Bakewell in 2015, the US-born musicologist aimed to provide long-term sustainable jobs for the island’s residents.

Read my review to find out all you need to know about “The Social Distillery”.

Pride. You sense it in every single word from Isle of Harris Distillers. From interviews to press releases, web copy to social posts, it visibly embodies the entire organisation.

Perhaps that’s because those behind the brand message love their job and know they’ve got a great product. While almost certainly the case, it’s probably more a symptom of the core values and ethos instilled from the outset. This is a distillery for the entire community.

Such is this ethos, I could write about it for a full article itself. For the purposes of the review, I’ll stick to what I feel are some of the key points to note. And what adds that extra level of magic which elevates a good gin to a great one.

Nicknamed “The Social Distillery”, the distillery was the brainchild of Anderson Bakewell. The US-born musicologist has had a love affair of the Hebridean island since the 1960s.

Bakewell’s affection for Harris led him to found the Distillery, with the help of 17 private investors, to bolster the island’s economy. Not just from the distillery itself, but through tourism to the island.

Speaking to the Herald in 2017, managing director Simon Erlanger stated that Bakewell  “Had this idea, if you could somehow bottle the essence of Harris and send it out to the world, you could encourage people to come on holiday here.” (If you haven’t seen any pictures of Harris, a quick Google search will have you sold!)

Now, four years into the journey, Isle of Harris Distillers employ over 30 islanders, or “Hearach” to give the Gaelic term for a Harris native. This includes school leavers and distillers who had no previous experience, all trained up to a level capable of making their spirits.  In November 2018 they also took on a school leaver as an apprentice distiller. Not a bad first job if you ask me!  With an island population of less than 1,916, this alone is quite a sizeable boost to the economy.

Visitor numbers to the distillery hit 92,000 in 2018, an increase of over 10% on 2017. To put that into perspective, the entire Outer Hebrides had around 220,000 visitors in 2017 according to VisitScotland. These figures alone highlight just what Harris Distillers are doing for the island. 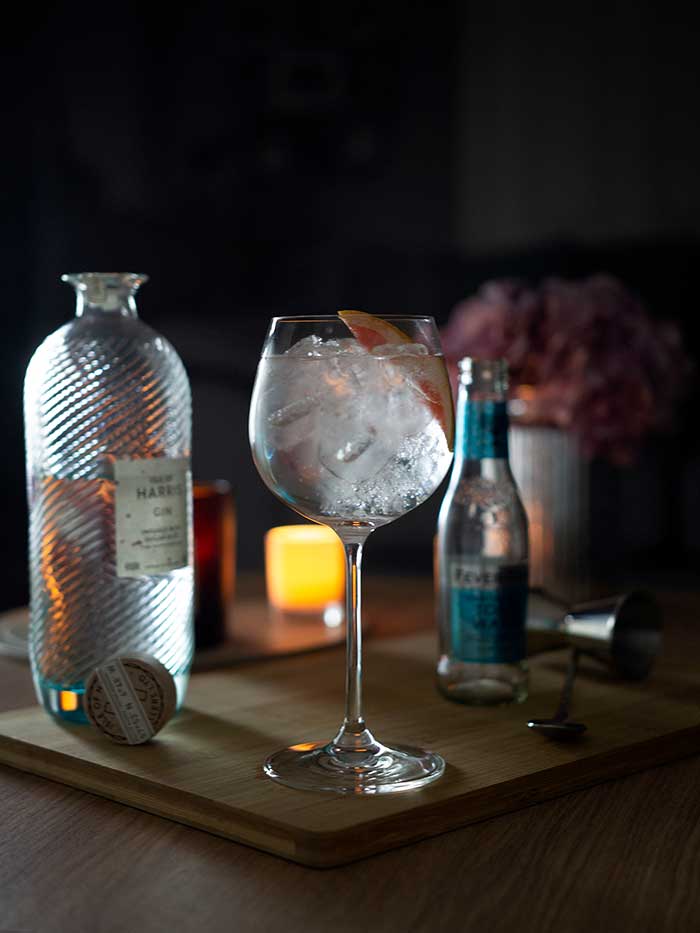 © From the Gin Shelf

From Time To Time… Be Here

A short film by Lawrence and Jacob Winram, connecting you to life on the Isle of Harris.

Despite the incredible success of their gin, Harris Distillers describe themselves as “first and foremost a whisky distillery”. It’s from Scottish Gaelic that they’ve named their forthcoming whisky, The Hearach.

As with many distilleries, producing gin is the perfect way to keep cashflow going until the whisky has matured. However, the gin’s success has surpassed all expectations, which in turn has contributed to a higher number of employees than initially targeted.

But given the high benchmark set with their gin, the board of Harris Distillers is clear their second spirit will not be rushed. 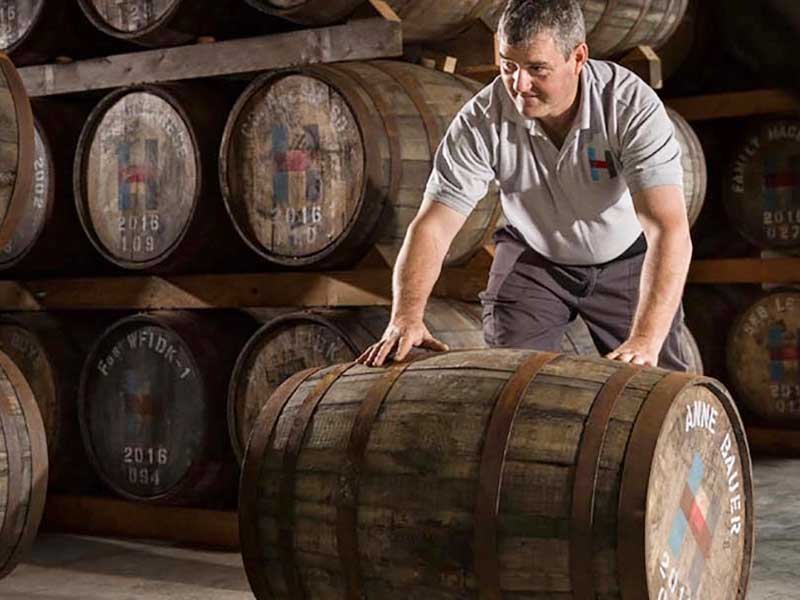 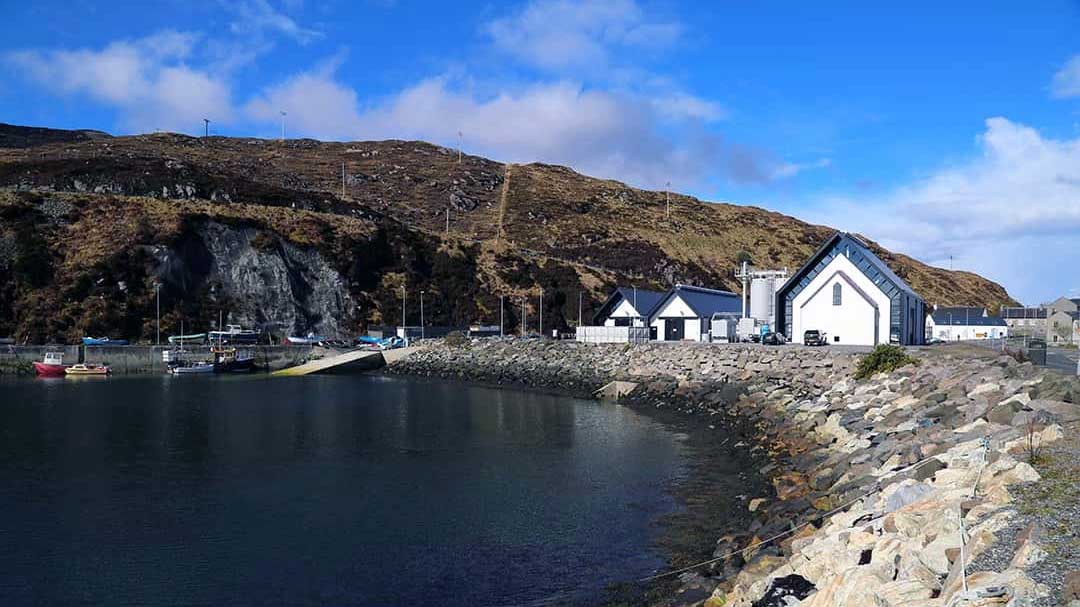 “For, with and from the Isle of Harris”

There’s been a huge debate about the provenance of gin, especially in Scotland.

What defines a Scottish gin? Many believe a true Scottish gin needs to be distilled in the country, while The Gin Cooperative have been doing their bit to increase transparency about where a gin is made.

Provenance is also central to Harris Distillers. One of their core values is ‘for, with and from the Isle of Harris’. As well as working to provide jobs for the local economy, they also use local ingredients as one of their key botanicals – sugar kelp. This is ethically harvested from around the island by local diver Lewis Mackenzie.

To further reinforce the island connection, the distillery’s coordinates are printed on the tape across the bottle stopper. You can be sure that your bottle of Harris Gin was created in Tarbet at 57° 53’ N 6° 48’ W.

Harris Distillers’ strict ‘buy direct’ model is also quite unique. With a network of ‘click and collect’ partners, every order of Isle of Harris gin is placed through their own website or in person at the distillery. By controlling the supply chain in this way, it helps to maximise profit margins, while adding that extra sparkle of magic for the customer. Every drop is distilled and bottled in Harris, and shipped directly to you. 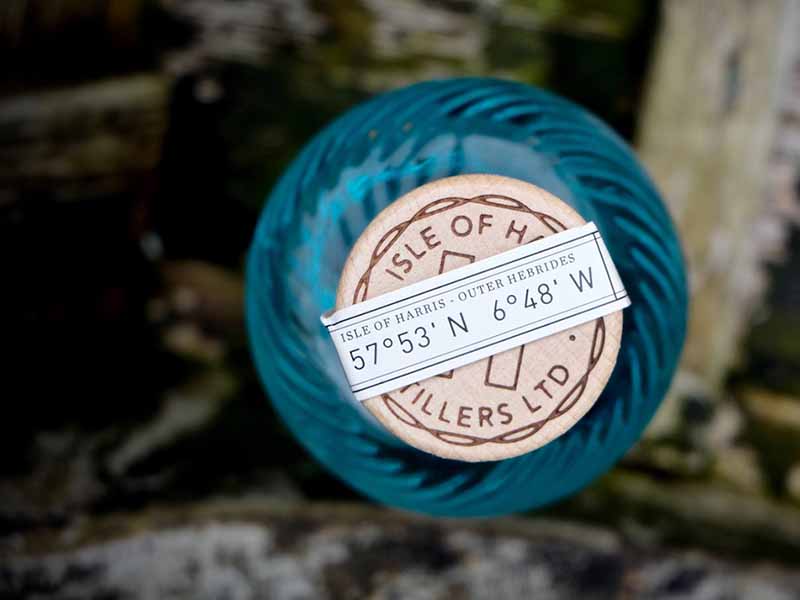 Read my top tips on how to make the perfect gin & tonic.

Opening the cork gives a satisfying deep, echoey pop. It certainly whets the appetite. As you nose the gin, it’s juniper-forward, fresh and sweet. Citrus notes of the bitter orange and coriander aren’t far away, while always in the background is the sugar kelp, adding a rich maritime scent, really helping to transport you to the Hebridean isle.

It’s very much a traditional gin to the nose, but with a contemporary twist.

To taste neat, citrus notes are the first to appear before fading to bring juniper from the background. There’s a sweetness here from the liquorice before the cassia bark and cubeb provide a peppery finish. The sugar kelp makes itself known with a sweet saltiness.

Overall, it’s a really well-balanced, refreshing and smooth gin. There’s nothing too overpowering and certainly enjoyable as a sipping gin, which is Harris Distillers’ preferred way of drinking it.

When tonic is added, there’s not much I can say other than “wow!” A G&T really takes Harris Gin to a whole new level. The juniper and sugar kelp rush to the fore, closely followed by sweet citrus. The sweetness is accentuated compared to when tasted neat, while there’s a floral fruitiness in the background. It’s absolutely divine.

As the citrus fades away there’s a gently warming spice and herbaceous finish. Bitter citrus lingers on the taste buds, should you be able to wait long enough before having another sip from your glass! There’s no doubt you’re drinking something special and it’s exactly the sort of flavour profile I love.

Harris Distillers recommend Walter Gregor’s Tonic Water, which goes really nicely with the gin. It’s lighter on the fizz than many brands, so if you like something a bit more bubbly, I’d recommend Fever-Tree Mediterranean. To garnish, they recommend red grapefruit, while my personal preference is a wedge of orange. Either way, it’s a simply stunning gin. 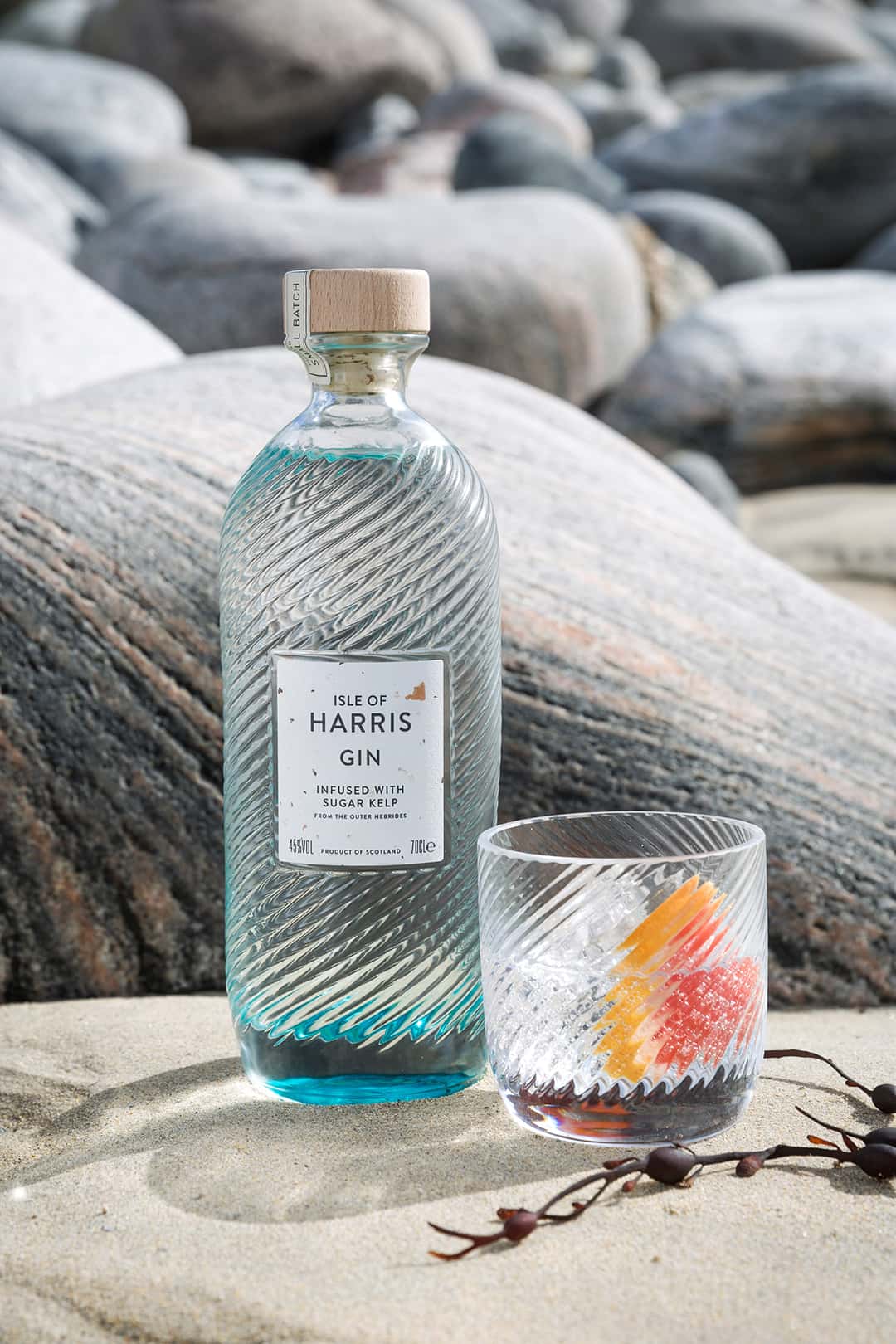 When tonic is added, there’s not much I can say other than “wow!”

Now onto the bottle! If there’s a more stunning design, both conceptually and aesthetically, I’ve yet to see it. I named it my favourite against some tough opposition, and while there’s been some lovely new packaging on the market nothing has surpassed this thing of beauty.

Each label is unique too – individually flecked with fragments of copper leaf and sugar kelp, further capturing the Hebridean landscape. There are fingerprints on the sides of the bottle too as if the bottle was washed up on the beach.

On the bottom of the bottle there’s a hidden message in Latin – “Esse Quam Videri”, which means “to be, rather than to seem”.

There’s no doubt the bottle has added to the enormous demand Harris Distillers have experienced for their gin. However, that’s only going to get you so far. It’s the spirit on the inside that will have people coming back time and again for more – myself included. 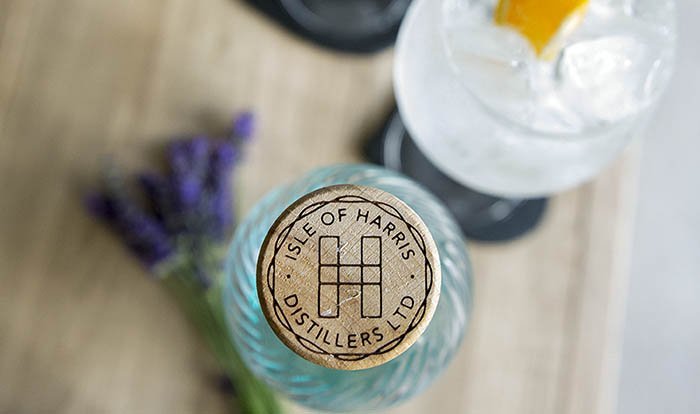 © From the Gin Shelf

Isle of Harris Gin is everything I hoped it to be. It’s the new jewel in the Scottish gin crown. Where once Hendrick’s was the pioneer, Harris Gin has taken up the mantle.

For me it ticks every box – both as a gin fanatic and by meeting the aims Bakewell set out to achieve. The beauty of the island is enclosed in the bottle and is now sent out to every corner of the globe. They’ve done things differently. They’ve done things better. And for my money, there’s not a gin out there I’ve tried which can surpass it. The standard has been set. It’s over to the rest to rise to the challenge.

Where once Hendrick’s was the pioneer, Harris Gin has taken up the mantle.