The bottle of Never Never Juniper Freak Gin for this review was purchased by From the Gin Shelf. All opinions are that of the author.

With Australia’s Never Never Juniper Freak Gin, there is no such ambiguity – and if you’re a “juniper freak” like me, read on!

Never Never Distilling Co. was launched in 2017 by three friends – George Georgiadis, Sean Baxter and Tim Boast. They all had links to Adelaide and it’s here where the Never Never story began, distilling in the back of a shed. Despite their modest surroundings, they set out with the ambition to become Australia’s most exciting and innovative gin brand – no mean feat when you think of the boom the country’s gin scene was (and still is) going through.

When George and Tim bumped into each other for the first time in 5 years, they were, coincidentally, both thinking of starting a distillery. While both were working in finance at the time, Tim had long been obsessed with brewing and distilling. He descends from the Gilbeys – a Scottish distilling family whose brand is now owned by Diageo. Well before Never Never was launched Tim would spend time in his garden playing around with stills and fermenters.

Sean’s background is in hospitality and was a brand ambassador for Diageo, bringing a knowledge of the spirits industry – as well as a great palate, being a keen cook and former Masterchef contestant!

The name “Never Never” comes from the vastness of their home and the three friends stepping into the unknown on a journey to create some of the country’s best gins. And as of 2020 the brand well and truly has views of the “Never-Never”, with the distillery now sitting atop the tallest hill in the McLaren Vale.

Some 25 miles from their original 16 metre square home, it shows just how far Never Never have come in a few short years. The multi-million dollar site is complete with cellar door and visitors can enjoy tasting and masterclasses with views as impressive as the spirits on offer. 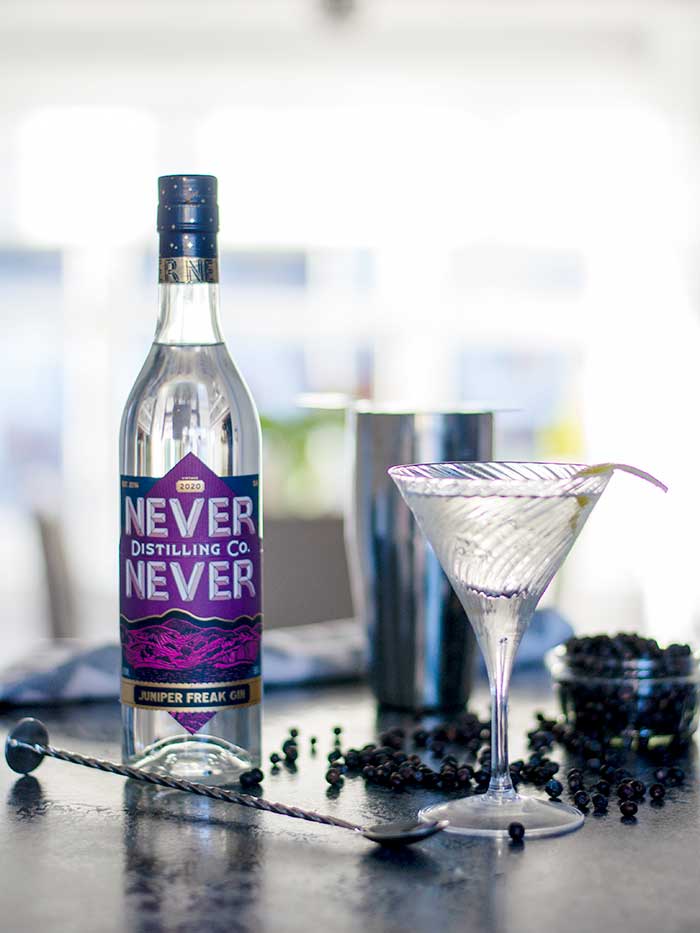 A celebration of the annual juniper harvest

Never Never release a different vintage of Juniper Freak each year. Each season’s crop is transported by air freight over from North Macedonia as opposed to boat as this can take months. This allows the team a head-start in assessing the vintage.

Read my top tips on making the perfect gin and tonic.

The core gins in the Never Never range all derive from their flagship Triple Juniper London Dry – a gin that took 6 months to develop. Using their “Triple Juniper Process”, the distillery really dial up the gin’s key botanical.

Firstly, juniper is steeped in neutral spirit for 24 hours. This extracts a lot of flavour before distillation even begins. Additional fresh juniper is then added to the pot along with coriander seed, angelica root, orris root, liquorice root, cinnamon and Australian pepper berry.

Finally, lemon and lime peels are added into the vapour basket (that sits above the spirit in the still), along with even more juniper before the distillation begins.

This is where Triple Juniper get its name, from the three different ways juniper is treated in the process – maceration, boiling and vapour infusion.

Juniper Freak is created by blending Triple Juniper Gin with a pure juniper distillate. Yes, you read that right – it’s not called “Juniper Freak” for nothing!

Firstly, following its distillation, the Triple Juniper Gin is diluted to 58% ABV – the same strength as Juniper Freak. The dilution process is carefully managed over several weeks as, due to the huge concentration of essential oils in the glass, overdoing the dilution at any one time will result in the oils coming out of suspension and making the gin cloudy.

The pure juniper distillate is distilled using the same “Triple Juniper Process” and dilution methodology described above and then blended together.

It’s a truly fascinating process and pretty complex compared to a traditional pot distillation, for example. 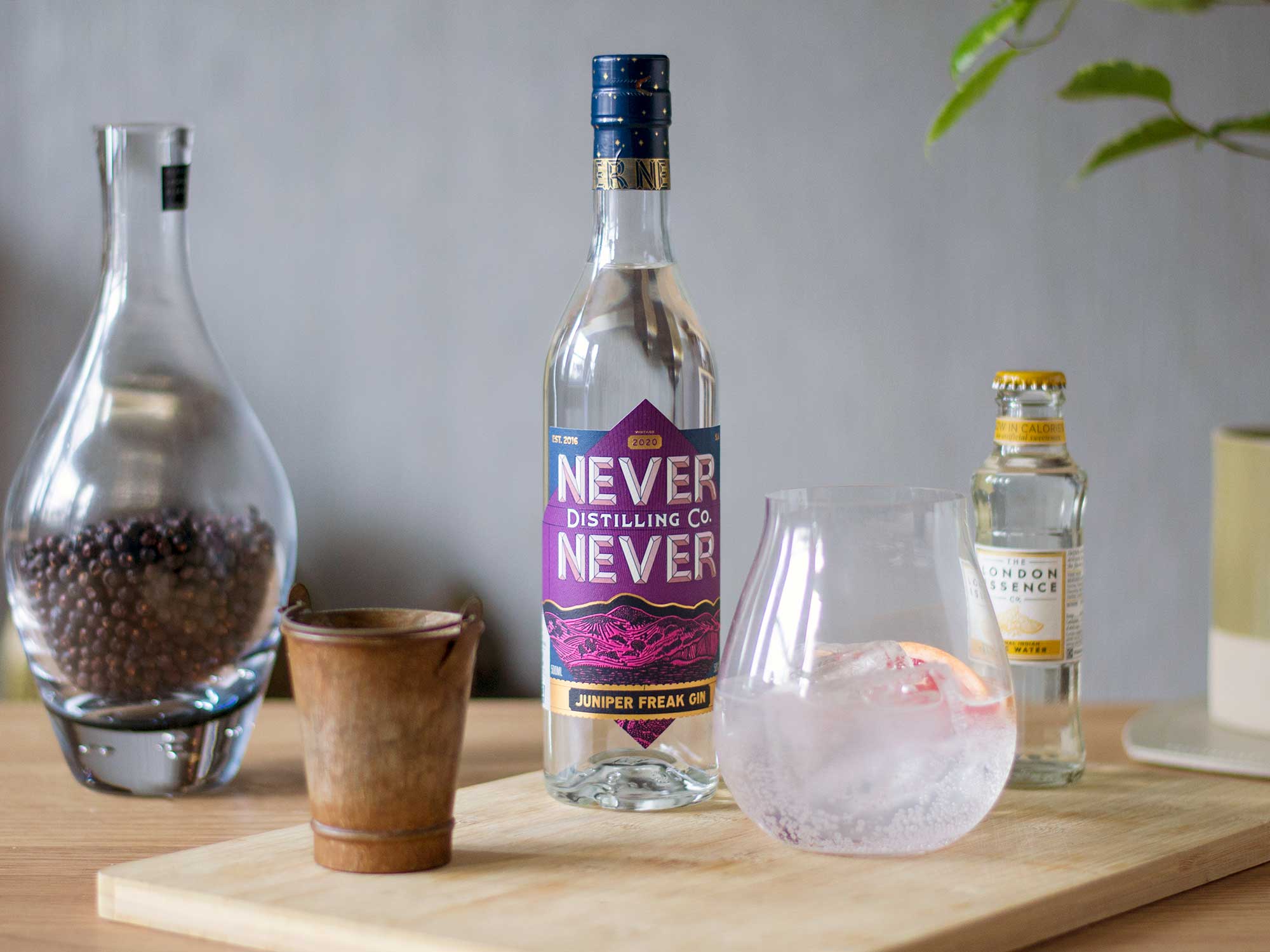 While I’m sampling the 2020 vintage for this review, I’m reliably informed each vintage is quite a bit different from the last. It’s something that Never Never found surprising when they first made Juniper Freak. It isn’t noticeable across their other expressions but due to the concentration of juniper in Juniper Freak, it’s far more pronounced.

The reason for the changes with each vintage is due to differing amount of immature berries making it into the harvest each season – so you’re tasting the effects of climate on the crop that year.

The gin was never intended to a seasonal release but Never Never noticed the difference between batches and thus it became a vintage release by happy accident!

Despite its 58% ABV, Juniper Freak doesn’t smell like it’s that strength. The juniper notes are, as you’d expect, smacking you in the face, but there’s so much going on within that juniper – piney, green, fresh, woody… I’ve literally been holding my glass to my nose for several minutes before I write this, it’s that pleasant.

There’s a hint of lime and pepper underneath as well, and it smells heavenly!

To sip neat. wow! Unbelievably smooth, defying its ABV, it glides across the palate like silk. Fresh, green juniper is the undeniable star of the show, with coriander and those lime notes underneath. The finish is long and enduring with a touch of sweet cinnamon and pepper berry leaving a tingling spice in the mouth.

With tonic, Juniper Freak is perfect for fans of classic gins – a juniper charged delight to the senses. There’s heavy louching (cloudiness in the glass) due to the high concentration of essential oils in the gin. The flavour profile doesn’t change too much from sampling neat, perhaps a little more woody and, as you’d expect, less spice. But for sheer appreciation of the craft, I could sit and sip this neat over ice every time!

With its bright juniper and high ABV it’s also great for cocktail and will cut through well in a Negroni, while also being perfect for a Martini. But trust me, if you love juniper-dominant gins as much as I do, simply sip it neat in awe!

I can’t praise Never Never enough for Juniper Freak. Given the maturity in the gin market, being able to create something so unique using juniper as the star of the show is something to be admired. This, for me, is what gin should be – juniper forward with a balance of other botanicals bringing nuance and intrigue with each sip. It’s by no means a one-trick pony.

Learning about the process of making their gins and then being able to sit and appreciate the resulting product, it’s clear Never Never Distilling Co. are true masters of their craft and in my opinion have the potential to become one of the world’s great distilleries, up there with the likes of their Australian contemporaries Four Pillars.

Never Never Distilling Co. are true masters of their craft with the potential to become one of the world’s great distilleries.

Where is Never Never Gin made?
Never Never gins are made in their distillery in the McLaren Vale, Australia, about 45 minutes’ drive from Adelaide.