ADVERTISEMENT FEATURE:
Free bottles of Hrafn Valkyrie & Cranachan were provided with an agreement to share and review. All opinions are that of the author.

Having released their first gin, Thought & Memory, in 2018, Raven Spirits expanded their range of premium gins in the summer of 2021 adding two new expressions – Valkyrie and Cranachan. Rather than being sister expressions, you could describe these new gins as ‘parent and child’. Read my review to find out what the hell I’m on about!

Pink, but not as you know it

Valkyrie and Cranachan add to the core range of Hrafn gins which also includes their Valhalla and Winter expressions. With Chranachan, they’ve deviated from their usual citrus-led London Dry style, making their way into the world of “pink” gins.

Knowing Raven Spirits’ founders Callum and Peter Sim, this was a move would have resisted. But heading into the flavoured gin category was the obvious choice for expanding their range – indeed the market almost demands it, both consumers and distributors.

Many brands have ultimately succumbed to the pressure, which as a consumer, has thankfully increased the quality of the flavoured category’s offerings exponentially. There are now several expressions in this space which I’m happy to recommend – and indeed, drink. Cranachan is another which I can add to the list – inspired by the famous Scottish dessert from which it takes its name, a favourite of “Granny Raven”!

But the story of Cranachan starts with the other new expression in the Hrafn Gin range – Valkyrie. Described as the “carrier gin” from which Cranachan is made, it (thankfully) became a product in its own right almost by accident. This seems the right move given the fact that, a month after its launch, Valkyrie was awarded a Master medal at the International Gin Masters 2021.

Raven Spirits were conscious that many brands simply flavour their original flagship offering when creating a pink gin, but this didn’t sit right with brothers Callum and Peter. Indeed, they tried using Thought & Memory but, while nice, this didn’t produce the results they wanted. “Nice enough” wasn’t… well, enough.

It’s fair to say, Valkyrie is closer to what fans of Raven Spirits might expect. They’ve become synonymous to those who know them, for their use of mandarin as the signature botanical. With Valkyrie, the botanicals are the same as their Thought & Memory and Valhalla gins, but this time the signature botanical is replaced by another citrus fruit – Jara. This unusual Southeast Asian fruit, green in colour, resembles a large, bumpy lime in appearance, while to taste, it’s like a cross between a lemon and lime. 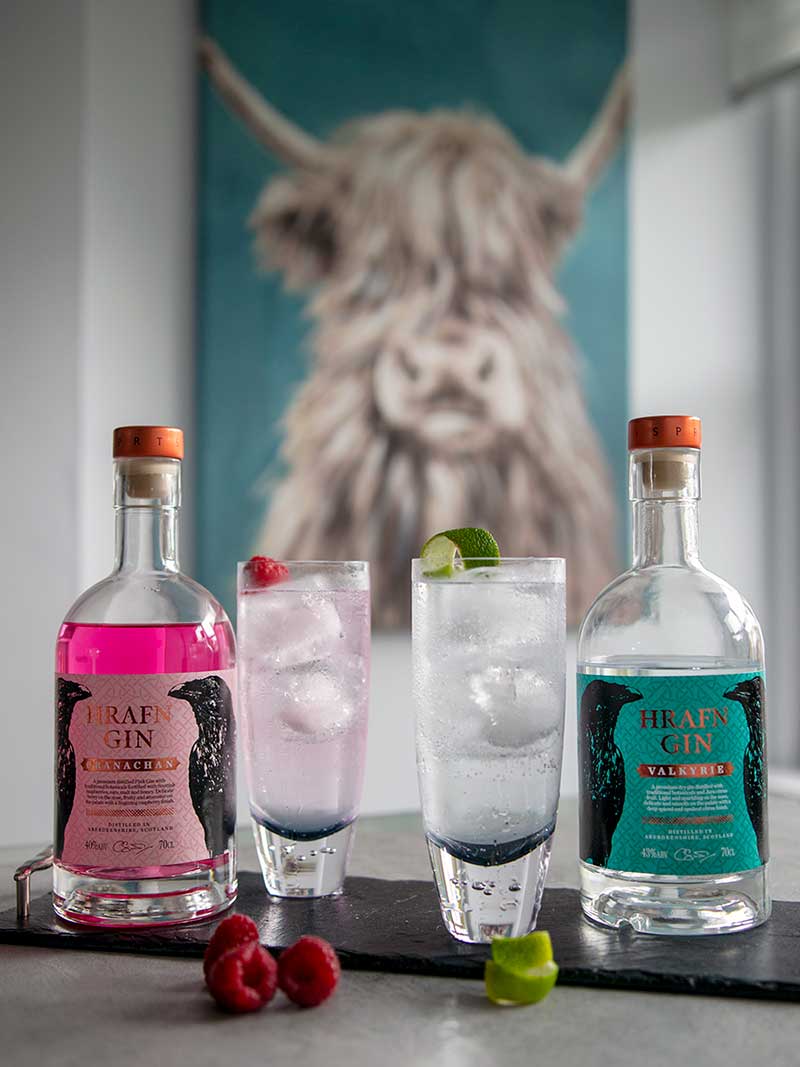 The same botanicals as Valkyrie but with added raspberries, honey, oats and new make malt spirit.

How Valkyrie Gin is made

Valkyrie Gin uses the same mix of botanicals as Thought & Memory and Valhalla, but for one substitution. Out goes their signature mandarin and in comes the relatively unknown Jara fruit to add to juniper, coriander seed, angelica root, orris root, cassia bark and cubeb pepper berries.

Made at Deeside Distillery, like the original expressions in the Hrafn range, Valkyrie is a London Dry, distilled on an iStill on a pot still cycle. All seven botanicals are added to the still for distillation without any maceration beforehand and Peter Sim explained this allows the vibrant citrus to shine through.

As with Thought & Memory, Valkyrie is rested in a stainless steel tank for four weeks before being reduced to a bottling strength of 43% ABV with Deeside spring water.

How Cranachan Gin is made

As previously stated, Valkyrie was designed with Cranachan in mind and is referred to as the “carrier gin” by Raven Spirits – the base from which their pink gin is made. Using a process of blending distillates to Valkyrie, Callum and Peter have perfected their take on the Scottish dessert – a simple dish, containing just a handful of ingredients.

And it’s the four primary ones which are used here – local Aberdeenshire raspberries, oats and honey heather, and new make malt spirit. The latter is made at the same distillery where Hrafn Gins are made.

Each distillate is made in mini copper pot stills and Valkyrie is then flavoured with these and coloured, bottling at 40% ABV. The raspberries and honey are distilled individually, while the oats are made into oat milk before rectifying with the new make spirit.

How to serve Valkyrie Gin

How to serve Cranachan Gin

On the nose, the citrus jumps out the glass. Vibrant lemon and lime with undertones of juniper. To sip neat, there’s an initial flirting of juniper which gives way to the fresh citrus notes so prominent on the nose. The citrus dies away but lingers on the finish joined by some subtle spice of the cassia bark.

A splash of tonic really opens up those citrus notes – less intense but much more the star of the show. Surprisingly, despite it not containing the signature mandarin of their other expressions, this still very much feels part of the Hrafn family.

I’d always thought that the mandarin was the hero of Thought & Memory and Valhalla – and it is – but there’s a familiarity in taste as a G&T. To me, it really highlights just how well the other botanicals support the citrus in all the gins. 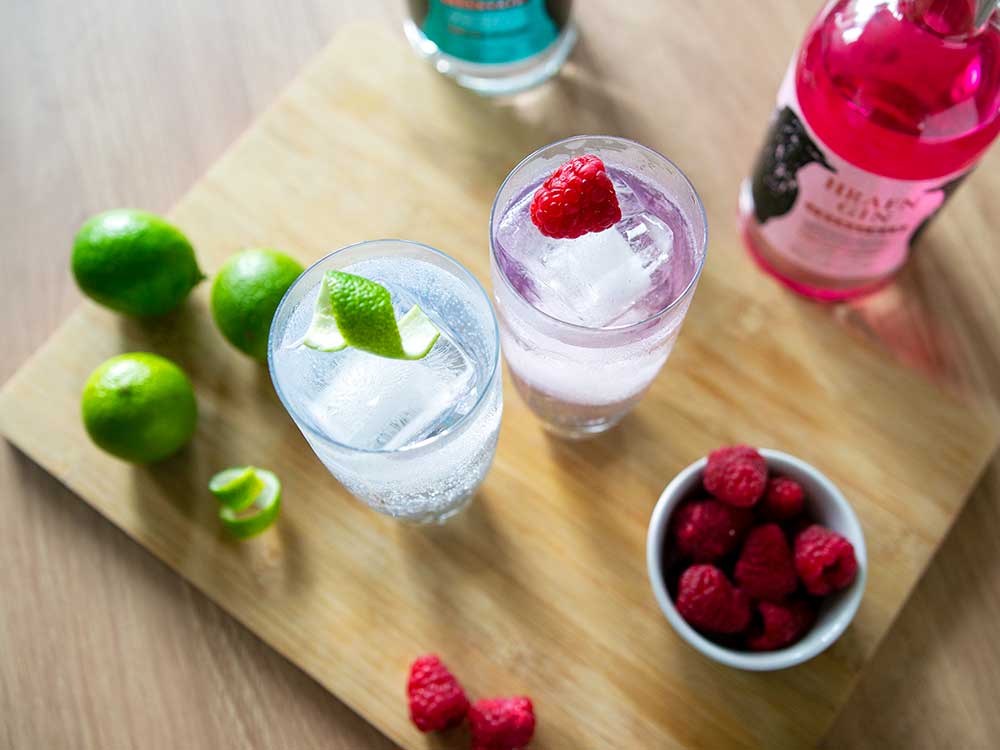 As you’d expect, with Cranachan, you get subtle undertones of the base gin, Valkyrie, but it’s the raspberries that are the most prominent on the nose, with honeyed sweetness and an ever so slight hint of malt.

On the palate, juniper still plays its part (as all gins should!) followed by the juiciness of those local raspberries. There’s perhaps more of a spiciness to the finish, tingling and warming, but balanced out with the sweetness from the honey. Where Valkyrie was silky in texture, Cranachan is much creamier, perhaps as a result of the added oats.

With tonic, I get a lot more of the maltiness from the new make spirit, joining those bright raspberries. As a longer G&T, the malt is less prominent with the raspberries stealing the show backed up by the delicate honeyed sweetness. A lovely gin and tonic!

Ever since I first tried Thought & Memory and Valhalla, I’ve loved the Hrafn gins. With Valkyrie and Cranachan, they’ve added another two outstanding gins to their name – different, but still in keeping with the brand – both in taste, standard and execution.

As expected when I heard Raven Spirits were launching a pink gin, Callum and Petter Sim have tackled it in a thoughtful manner, creating something that’s their own – but also something that’s “Hrafn”.

I love both gins, each with its own characteristics that will appeal, depending on my mood. If I had to pick my favourite? I’d probably lean towards Valkyrie, but that says more about my taste preference than anything else.

I love both gins, each with its own characteristics that will appeal, depending on my mood.